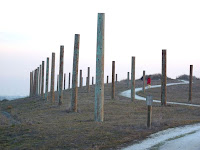 After a very pleasant Christmas morning, I went walking at Byxbee Park -- a converted former garbage dump (like many bayside parks). Packed dirt trails circled and covered the hills and mounds that were molded into a park-like setting, with sculptural features (primarily in the form of poles sticking up from the hills) at even intervals.

Previously, I had been focusing on these poles on the hill, and I turned right, before I should have, taking the Adobe Creek Loop Trail -- which went out to Renzel Wetlands. 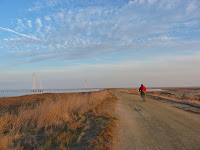 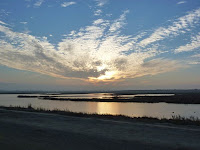 So, this time I was careful to walk further out to the Bay and then Right following the trail closer to Bay - walked SE along packed dirt trail until I reached an interpretive sign titled "Interrelationships" showing the web of relationships in the baylands.

It was a cool, but clear day. The winter landscape had started to look a bit gray, and I found my eye lingering on the few bright bits of color  -- such as the small yellow blossom (shown at right). 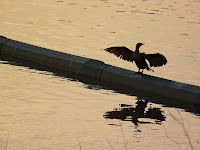 I walked back same way I'd come, passing several people out for a holiday walk, or bicycle ride, and a very cute little dog in a santa suit out for a walk with its owner. There were a number of shorebirds and ducks in the bay visible from this trail.