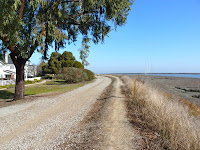 From the end of Spar Drive (cul-de-sac), we climbed up a short dirt rise, up onto the wide, packed dirt/gravel section of the Bay Trail (shown as a red line on Bay Trail map), headed northwest. We passed Mariner Park, and a few other smaller parks along the way.

Thank you to Julie for joining me on this walk today. Sometimes it's fun to just walk and watch what's unfolding around you.  We spotted a white cat dozing in the sun near some homes on the left/north side of the trail. It politely ignored us when we called out to say hello.

We watched a group of little brown birds hopping around -- little "dumplings" with legs and beaks.

Out in the slough/bay there were a few kayakers, and a smattering of American Avocets moving their long curved beaks side-to-side through the mud, along with other shorebirds. We eventually reached Shore Dogs Park (where there was parking available); a bit further on was the Wastewater Treatment plant at the end of Redwood Point. 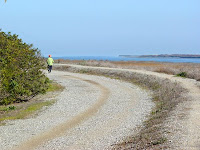 Shore Dogs Park had separate fenced in areas for smaller and larger dogs. (Dogs were allowed on certain sections of the trail we walked today, but only on-leash, primarily to prevent dogs from going after bird and wildlife nearby.)

Across Radio Road from the dog park, was a large pond that was teeming with birds of all sorts, mostly mallards and canvasbacks and other types of ducks we couldn't identify. Good place for them to hide during duck hunting season. 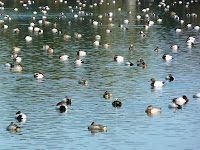 The first half of January this year has been marked by warm, dry, sunny weather, like today. Great for walking, but rain may be on the way by next week. 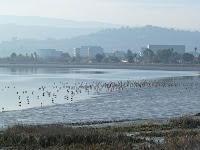