Today's walk was mostly along a paved (asphalt) combined bicycle/pedestrian path by the Bay. I started this walk at Seal Point Park, where I headed south, passing the large, fenced in dog park (separate areas for big and little dogs) as I headed toward Foster City. I walked over a bridge, out to the end of a Bay Marsh Boardwalk; and around a large Tidal Marsh Restoration area. 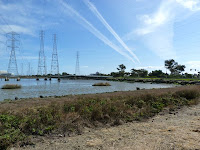 When I reached the golf driving range and putting area (marked by tall, netted fencing), I heard a chorus of frogs, in a strip of grassy bog area, in between the trail and the tall fencing. However, I didn't see any frogs. Had I tried to peer into where they were, I'm sure they would have all gone quiet. 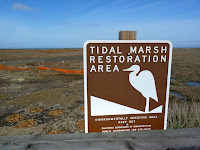 Further on, before I turned around and headed north back to Seal Point Park, I spoke to a few kite-surfers who were sitting out near the rocks (by the water), talking, and enjoying the company of three or four feral cats. The cats in this area have been the focus of Project Bay Cat -- an organization that has helped spay or neuter and manage/care for the population the cats who are wild or abandoned in this area. I was surprised to learn that some of these cats have managed to survive for many years. It can be a very tough life. 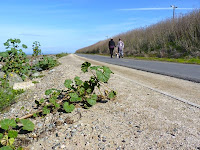 I also enjoyed taking a few pictures of three dogs out on a walk with their owners. Thank you JustPam. 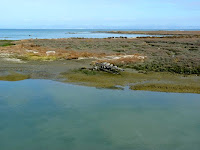 Today I reached the end of Beach Park Blvd., and crossed under San Mateo bridge (Highway 92), where I continued toward San Mateo. I turned around at a bench before a golf driving range/putting complex with high net fence, and I walked back the same way.

I walked south along the combined bicycle/pedestrian paved (asphalt) path -- occasionally taking the dirt/shell path closer to the bay. It was soothing to hear the sound of small waves lapping against a small strip of beach. I turned around at the intersection of Swordfish St. and Beach Park Blvd. (school site, where I left off last time).

On the way back, I crossed Beach Park Blvd. and walked around a shopping center, visiting Thai, Chinese, and Ramen restaurants. I then walked across Beach Park Blvd. again, and I continued along the levee trail/path until I reached my car.

I passed at least one kayak/board-surfer ramp access point. The area from Coyote Point (to the north) down to San Mateo bridge is a popular gusty spot for kite surfers.

Posted by Corinne DeBra at 11:55 PM No comments:

This walk was a short, pick-up segment that I missed last time when I ran out of time and couldn't finish. I walked south on Port Royal Ave. to Jamaica St. I cut through to the paved (asphalt) trail; and I walked north along the trail to the bridge underpass (E. Hillsdale Blvd. overpass) and back.

I did make one slight error: I was photographing under the bridge, but failed to look up before doing so. Note to self: birds often nest under bridges and can poop down on you (and your camera). Fortunately, I had some tissues with me. Lesson learned.

I started this walk by returning southeast on Beach Park Blvd. trail to Wheelhouse Lane (where I'd ended a walk earlier today). Once I reached the picnic table that marked the previous end-point, I turned around. I walked back on the levee trail along Beach Park Blvd. I took one slight detour and wandered into a "secret" bicycle park, via a dirt trail toward the bay (through a forest of dead fennel plants).

I then continued as far as a school (Beach Park Blvd. and Swordfish St.), where I turned around. On the way back to the car, I crossed the street and took a few pictures of saints at St. Luke's Catholic Church.

Crossed bridge over to Belmont, and headed right/northeast along the paved (asphalt) trail. We followed the trail into Foster City area. We turned around at Tiller Lane and Wheelhouse Lane, near Beach Park Boulevard, at a wooden picnic table, and walked back.

Thank you to Margaret and Albert for joining me on today's walk.

Posted by Corinne DeBra at 11:27 PM No comments:

From a small public parking lot off Port Royal Ave. (where I'd left off last weekend), I had to cut my walk shore, due to an appointment I had elsewhere. I turned around at Jamaica St. and Port Royal Ave. and walked back to the car.

Today I thought I might need an umbrella and a plastic bag for my camera, but it just misted lightly.

From the public parking lot, I walked across the Oracle Bridge, turned left (toward Highway 101), and followed a paved (asphalt) trail along the Belmont slough, under an underpass, up to the Belmont Sports Complex. I passed new Childrens Bridge (crossing over Highway 101), then I lost the path/trail around Concourse and Clipper. I passed the Hyatt (hotel). Eventually I found my way back to the Bay Trail to a long straight path (combination bicycle and pedestrian path).

I turned around at a small park (near the intersection of Port Royal Ave. and Rock Harbor Lane), near Lantern Cove Apt. Homes driveway. I walked back, and this time, instead of getting lost as I had on the way -- I easily found a dirt path from the Belmont slough -- passing on the slough side of the Volkswagen America/SunEdison building. I saw several artichoke plants that had gone to seed on my stroll back to the Belmont Sports Complex. From there I made my way back over the Oracle Bridge to the public parking lot, across the street ( from Oracle headquarters.

Posted by Corinne DeBra at 11:09 PM No comments: 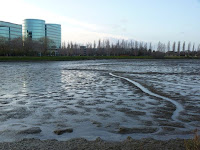 I returned to the Redwood Shores area late in the afternoon to take a second walk. I picked up trail behind the Redwood Shores branch of the public library. From there I headed walked southish along the water on primarily paved (asphalt) sections of trail and sidewalks. When I reached Oracle headquarters, the trail took me around and behind the campus. I passed the Oracle Bridge (leading over to Belmont/Foster City). 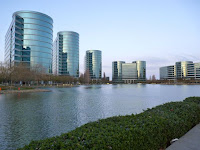 The high tide this morning had receded, leaving mud flats in its wake. The dozens of Canada geese I saw nibbling on lawns didn't seem to mind.

At the light on Oracle Parkway, I crossed over to Oracle HQ driveway, and walked along, parallel to, the large body of water with a large fountain and an official BMW Oracle racing sailboat -- all part of Oracle headquarters. 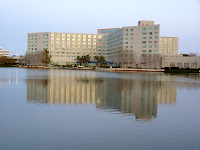 I crossed Marine Parkway and walked down Twin Dolphin Dr. to Hotel Sofitel, where I'd left off on a previous walk. The hotel (and Bay bar) offer a great view of the lagoon, if you want to stop to have a drink or a bite to eat. I turned around here, and I headed back, walking back on Marine Parkway. I eventually crossed the street to walk northwestish on Bridge Parkway, back to the Library. 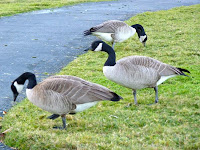 In between light rain showers, I walked NE on the trail behind the Redwood Shores branch of the public library. I passed a few different industrial parks (on the right side) of this mostly paved (asphalt) trail; the bay/Belmont Slough stretched out to the left/north side. The blue-aqua windows of the Oracle headquarters were visible in the distance (to the west) for most of this walk. 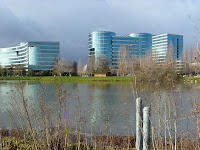 I passed a fork in the trail, and took the paved path to the right. Across the slough to the north was Foster City. After the industrial buildings thinned out, I passed a few new housing developments, and a lagoon. Eventually I reached Preserve Park, where I'd left off on a previous walk; and I turned around to walk back. Two years ago, when I passed this spot, I believe this area was still under construction. The Bay Trail and shoreline continues to evolve. 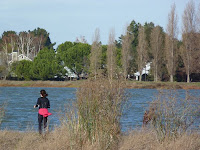 I walked out to a path toward the water. The tide was high, with some fences being half submerged.

On the way back, I took the paved dirt portion of the trail that forked off toward the water. It was a bit muddy in spots, but not difficult to navigate. The air was fresh after the rain, and the sun was out. 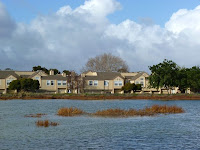 The highlight of this walk came when I was almost back to the library. A small child was running toward me yelling -- "It's going away! It's going away!" I turned around and realized that this little boy was literally chasing a rainbow (behind me). And his two younger siblings were huffing and puffing some distance behind him,  struggling to keep up. Further down the trail, a small boy was tentatively jumping into a small puddle, testing out a small pair of rainboots. 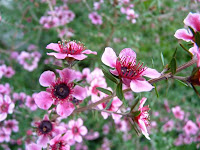 Before returning to my car in the library parking lot, I ventured inside the library, where I discovered the Sea Link Cafe -- a great place to stop for a tea/coffee/bite to eat.