I was only able to cover a short bit of trail late this afternoon, but I enjoyed seeing the different colored areas of cement and tile work that decorated the trail along Harney Way down toward Highway 101. 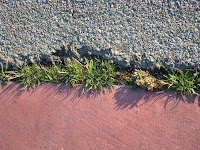 Although some of the tile work at the trail end needed repairs, I could still see a nautilus shell shape when looking at this area on Google maps (aerial or satellite view).

The protected area of Bay below Candlestick Point seemed to be a popular hang out for sea gulls and ducks. 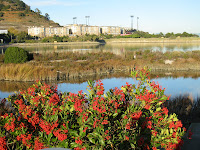 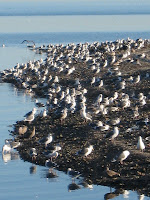 Posted by Corinne DeBra at 12:40 AM No comments: 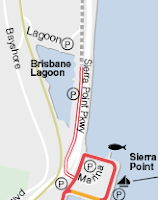 I started today's walk at the parking lot near the Brisbane fishing pier.
Today I spotted even more ground squirrels -- feeding, sitting in the sun, and dashing around -- than yesterday (on the strips of lawn around the fishing pier).

From the pier area, I walked West on the paved trail, as far as I could go before an arrow directed me back toward the Sing Tao Beer building, where there was a paved trail heading South. I saw (in the middle of the current economic downturn and lots of commercial for lease signs) full parking lots at Sing Tao and Walmart.com.

I walked South until I hit a point near the Bay (near intersection of red and yellow lines on the map shown), where I'd been walking a few days ago.

I then went North and then West (under Highway 101) then Northish along Brisbane Lagoon, on Sierra Pt. Parkway. (See Bay Trail map image above.) The map indicated, with broken red lines, this trail segment by the Lagoon was along paved roads (bike lanes); and, true enough, car and truck traffic whizzed by me at high speeds. (Note: Use caution when crossing the freeway off- and/or on-ramps, where Marina approaches the Highway 101 underpass. Highway 101 is shown as a thick white line on map.) In another example of urban coexistence, you also may get treated to a few trains going by, which I enjoyed. However, if you're staying at one of the nearby hotels it may not be so fun.

Along the Brisbane Lagoon, there is a small area for fishing with a few parking spaces. It was also a reasonably good bird watching area. There were a few pelicans crash-diving into the water, lots of ducks lolling about, and at least one egret. Several small birds were perched in the wild anise/fennel bushes. The rest of this area is marked private property. There are limited areas to stop or park if you're in a car. I walked a little past the end of the Lagoon (toward the Highway 101 South on-ramp) before turning around and heading back.

It was a big day for ground squirrels today, and abstract photos of boat reflections.

Walk fast, and don't stop to take too many pictures. That was the plan. Well, that last part didn't work. 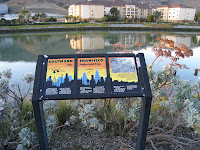 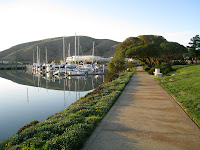 move quickly enough to keep warm as the sun set.
I'm still wearing my flip flops, but I may need to get some special "flip flop socks" soon.

The small rectangular "bay" (shown on map) is actually an old shipbuilding area from World War II and is ringed with some informative signage about the history, and about South San Francisco, and the Bay Trail. 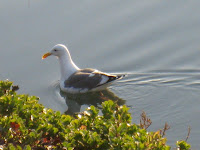 Thank you to Sandy for joining me on this walk today. 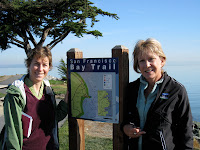 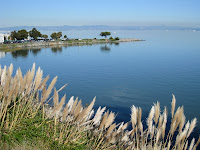 We parked by the Oyster Point Fishing Pier (see image)/Oyster Pt. Marina; and we walked 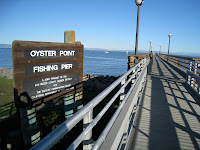 north to Oyster Cove Marina and back.

My friend Elise and I enjoyed the afternoon sun, but it got much cooler as soon as the sunlight started disappearing. We were approached by a very friendly dock cat at Oyster Point Marina (see image), and later we spotted a black-crowned night heron (see image) as well as several other birds. Elise's comment was that this night heron looked a bit like a penguin - or at least its closest relative in the Bay Area. 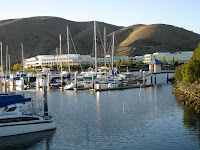 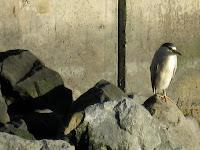 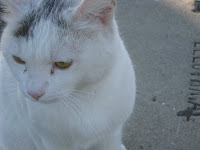 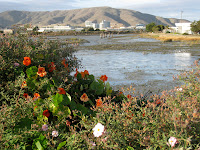 Today was a bit cloudy and skies were darkening by the time I completed this segment -- a link between last Saturday's and yesterday's walks.
Most of today's walk was along sidewalks and surface streets - along N. Access Road, Airport Blvd., and (following Bay Trail signs) past a parking garage, and a water quality control plant (Belle Air Rd.) to the bridge where yesterday's walk ended. Most of the bird sightings took place in the first 15 minutes, when I walked out on the SamTrans Peninsula (retracing steps from last Saturday). 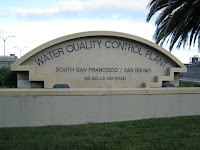 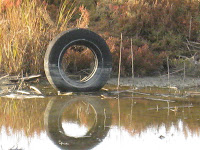 Another beautiful day. I walked 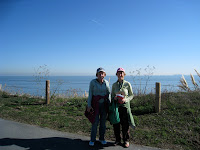 today with my friend Sandy, and we discovered, as we walked south from San Bruno Point parking lot -- expecting to hit a dead end, that the dotted line (gap) shown on the Bay Trail map (south of San Bruno Pt.) was now a walkable path/trail. So, we headed south (toward the San Francisco airport); occasionally peered down at clumps of shorebirds embedded in the short grass and mud/sand by the water; and enjoyed the sun. We stopped at a bridge not far from Belle Air Rd. and Airport Blvd., turned around and headed north back to San Bruno Point. 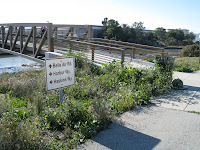 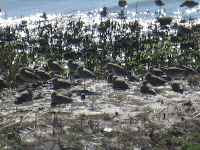 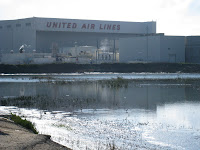 My boyfriend Alec & I power-walked this little leaf-shaped peninsula, on the north side of San Francisco Airport, on our way up to the San Francisco Animation Festival. It was a beautiful day, and there were lots of birds in the more sheltered lagoon-like area (land side) West of the peninsula. (Not bad given how close we were to the airport -- see image of the United Airlines building nearby.) We also had a nice view of the mountain to the West lettered with "South San Francisco" on the hillside, that we frequently see off the freeway, as a blur.

I was excited to see (or more accurately recognize) my 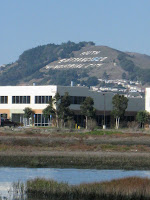 first bufflehead (black and white colored) ducks. (See grainy image -- only marginally better than the grainy photos you might see of the Loch Ness monster.)

I don't recommend walking the Bay Trail at night. But, on warm nights with a full moon, it can be beautiful. I got lucky and found the public parking lot in the dark, and heading Northwest I walked first as far as I could go (to the tidal gate(s), just North of the intersection of Millbrae Ave. and S. McDonnell, south of the San Francisco Airport (SFO). Then I turned around and walked Southeast, until I hit "the gap" zone where I ended up in someone's back parking lot (private property). I enjoyed a dinner stop at Benihana's (Japanese) restaurant, conveniently located right on the Bay Trail, out on a small point, with the moon lighting it from above. And speaking of the moon...

My only heartbreak this evening: not bringing a camera with me, because I thought it would be too dark. As if to mock me, a gigantic, cheddar cheese pumpkin of a moon rose out of the Bay, casting beautiful reflections on the water. Silhouettes of planes landing at SFO started to cross in front of it. Never leave your camera behind. I also have to say, it is impressive watching thundering planes/jets take off in pairs so close-up. Although I wouldn't want to live this close to a major airport without extra soundproofing in all my walls.

One final note: I was struck by how much more foot traffic there was in this segment this evening. Hurray, people walking, and taking advantage of this great resource we have at our disposal.

Wildlife Sightings:
None; I could hear a few shorebirds, but it was too dark to see any creatures - except a few dogs going walking with their owners.
Posted by Corinne DeBra at 11:34 PM No comments:

I finished walking the two loops that are part of the Burlingame segment of the Bay Trail. The smallest loop is the walk around Anza 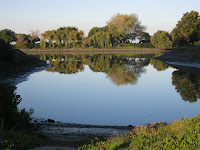 Lagoon which is ringed by hotels, restaurants and office buildings, but still remains quiet and peaceful given the ample buffer space around the lagoon. The (lower portion of the) larger loop is made up of Airport Boulevard which is linked at both ends to the Bay Trail that fronts the Bay.

The weather was warm and beautiful. In the absence of wind, the water was very calm, and was bathed in pastel colors at sunset.
I watched two fishermen whose cell phones 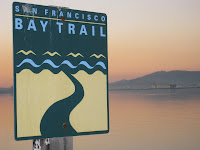 kept ringing.
(Does this scare the fish?) 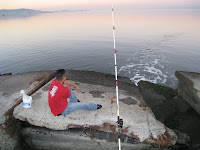 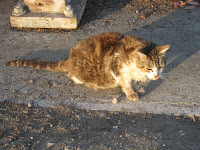 Posted by Corinne DeBra at 11:11 PM No comments:


It was a beatiful day today: sunny, warm, and the Bay surface was
like glass. 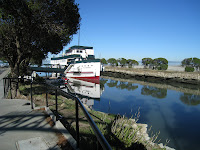 I passed The Sherman (apparently an old, permanently docked Oakland Ferry boat) first. It took me a long 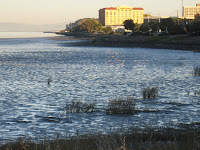 time to cover a little more than 3 miles, because I made two long stops: 1.) I paused to talk with a birder, NW of the Embassy Suites hotel, and that was quite a long, interesting conversation; and, 2.) I stopped to eat an early dinner at Max's Restaurant in Burlingame. The latter stop was also my turning around point. I took so many pictures of the moon rising on the way back that I worried the parking lot would be closed before I could pick up my car; but all was well. Run, run, picture, picture, run, run, picture, picture. I started to feel like a darting shorebird. 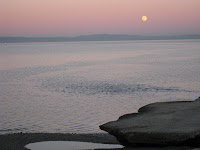 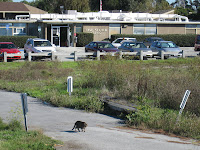 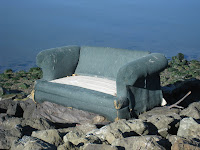 Posted by Corinne DeBra at 11:41 PM No comments: