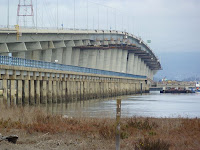 I parked at the same parking area that I did a few days ago -- at the foot of the Dumbarton Bridge (Menlo Park side) in an area marked by a "P" on the Bay Trail map. This time I walked southwest on a combined bike path/trail (shown as a solid, red line on the Bay Trail Map), along Highway 84, enjoying views of the new and old Dumbarton Bridges, and American avocets, egrets, little sandpipers, and other birds wading in the shallows of the Bay.

Note: part of the trail on today's walk was close to car and truck traffic that was hurtling forward at a good speed; so, know your route, and plan accordingly. 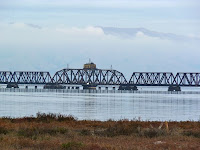 I turned right when I reached University Avenue -- a short section of trail that was little more than a packed dirt path/shoulder (depicted as red parallel lines on map). I turned around after passing a set of old train tracks. After walking back to Highway 84/Bayfront Expressway, I continued west on an asphalt bike/pedestrian path along Highway 84/Bayfront Expressway to the intersection with Willow Road. I crossed the road at the light, toward what recently became Facebook's corporate headquarters (the old Sun Microsystems campus). 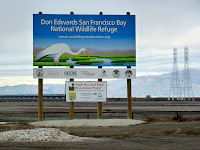 I decided to walk the paved (asphalt) loop trail around the Facebook campus (not part of the Bay Trail, and not shown on the Bay Trail map). I passed a black cat, hunting for food in the grasses by the water. This trail, adorned by pine trees along the way, went out toward the baylands, and came back around to Highway 84/Bayfront Expressway. 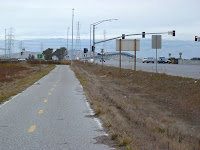 I walked through a small public parking lot (10+ spots) at the east end of the Facebook campus (not shown on Bay Trail map), and nearby I crossed Highway 84 at a stoplight/intersection with University Avenue, then walked east, back to the car. 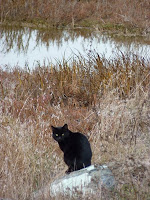