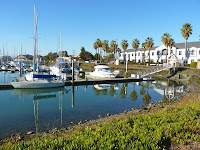 Today's walk could be divided into three parts. First, I started in the middle (where the "P" for parking appears on the Bay Trail map is shown at right), and enjoyed the short, paved path along the marina, and past the public fishing pier.

It has been great to re-visit spots from my first walk around the Bay. I was looking forward to having a late lunch or early dinner at Bella by the Bay Italian Seafood Restaurant (off Seaport Court, off Seaport Blvd.). Sadly, the restaurant was closed (I hope just temporarily) for repairs/remodeling due to a burst pipe. I enjoyed stopping to talk with several people in the area instead. 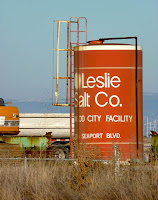 Next, I walked southwest (on the sidewalk along Seaport Blvd.) toward Highway 101. I turned right on Blomquist (shown as double yellow lines on Bay Trail map), which took me to... Malibu Castle. I had to go in. It was a castle, after all. I bought some popcorn and bottled water. I watched children and their parents play electronic games -- and as they won, strips of yellow tickets streamed out of machines -- to be redeemed for prizes. If I'd had more time, I would have stopped and played a few games of Skee-ball. I walked back to Seaport Blvd., and walked toward the Bay. Who needs to be enjoying popcorn inside a dark movie theater when you've got a nice view of the Bay like this? 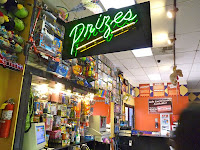 A large salt pond area on the right/southeast side of the road belongs to Cargill (although there was a souvenir -- a large replica of a Leslie Salt shaker on the property, behind a locked fence). Cargill was the big winner in salt -- in an industry where there once were many other companies. There were what looked to be rusty open, transport containers for moving salt along a set of rails, sitting abandoned -- a sign of what once was. 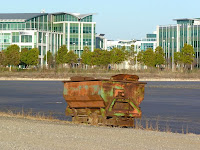 At the end of Seaport Blvd., was a road that went into Pacific Shores Center -- a modern office park.  A series of high rises with curved lines and aqua-colored glass co-existed with a strip of public open space along the shoreline. PDI Dreamworks, responsible for the animated "Shrek" feature films was located here, as were several other technology companies.

It was interesting to walk through this carefully manicured campus on the way to the public shore area. Several people were out walking their dogs and enjoying a New Year's breathe of fresh air. At the end, I had to walk briskly back to my car, as it was getting dark by the time I finished. 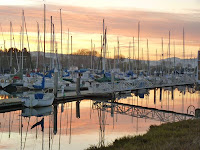 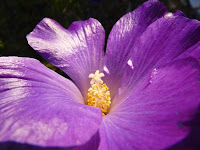