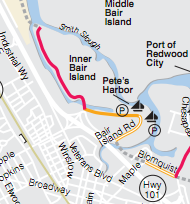 I started this afternoon's walk near the Bair Island Marina. From here I strolled northeast on Bair Island Road/Uccelli Boulevard out to Pete's Harbor, founded by Pete Uccelli, in the 1950s. The Waterfront restaurant was closed when I passed by, so I walked out to the end of the marina before turning around to continue north. 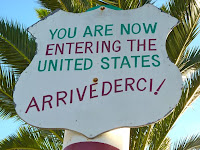 I walked back out Uccelli Blvd./Bair Island Rd. and turned right onto the mostly packed dirt trail that headed northwest (shown as a solid gold line on the Bay Trail Map).

This trail ended near Whipple Ave. and East Bayshore Rd., near a sign indicating that Bair Island was (still) closed, and it also marked the beginning of a paved (asphalt) bicycle/pedestrian path (solid red line on the map) at the Bair Island closed gate. I followed this path, which paralleled Highway 101, north toward the San Carlos Airport. 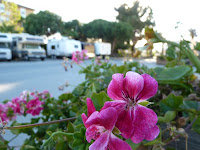 This bike path ended in a Public Shore parking lot (8-10 spaces), near some office buildings (Skyway Blvd.). I walked a very short little packed dirt/gravel path that extended from the parking lot, and then walked back to Bair Island Road. 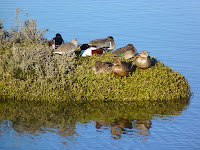 This time, I turned right/west on Bair Island Rd. (double yellow lines on map), passing a new housing/condo development, to the end of the road -- a round-about that joined with E. Bayshore Rd. Near the round-about I noticed a thin asphalt path that extended south, and went over a foot bridge and headed toward Peninsula Yacht Club/Docktown Marina (this area was shown as a dotted line on Bay Trail map).

So I followed this narrow path and crossed to the other side of the bridge (called the "Bridge to Nowhere" on Google Maps), and then turned around, and walked back on Bair Island Road to my car. 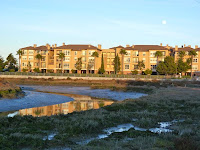 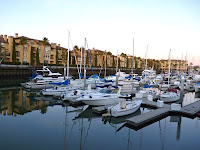