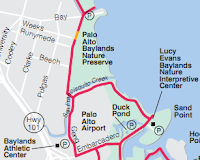 Today's walk in the Palo Alto Baylands -- along a combination asphalt and packed dirt trail (shown as a red line on the Bay Trail map) in East Palo Alto/Ravenswood South trail -- was cut short due to a closed section in trail. 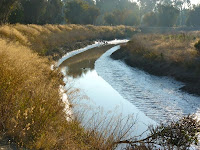 There was a slight overlap with a previous walk when I began this walk from the parking lot at the Baylands Athletic Center (at the end of Geng Road, off Embarcadero) and journeyed north to the San Francisquito Creek Trail toward Ravenswood. 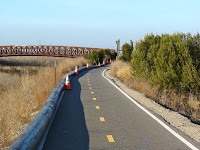 I walked northish, following the combined bicycle/pedestrian asphalt trail - over a bridge, passing a golf course to the right/east. As is customary in this area, Canada geese had taken up residence on the course. I continued along a packed dirt/gravel, which narrowed further until this packed dirt path led to a fence with a "closed" sign/gate. The Ravenswood South trail was temporarily closed for construction around Cooley Landing (peninsula). This section was estimated to be re-opened sometime in the summer of 2012.

Unfortunately, I forgot my camera; so the only two pictures that I have, of this somewhat drab winter landscape -- on a somewhat hazy day, full of palette grays and browns -- were taken two days before today's walk, when the sun was shining.