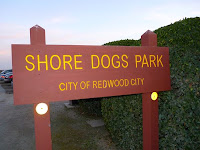 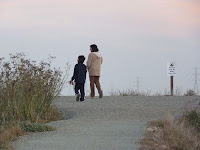 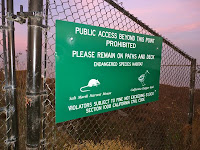 I had some time this evening, so I picked up where I'd left off on an earlier walk this morning. I started at Shore Dogs Park, as the sun was starting to slip below the horizon. I walked past the entrance to Shore Dogs Park out to end of the packed dirt path leading to the levee trail (Bay Trail), and turned left toward the Wastewater Treatment Plant -- where a small flame was rising (burning off surplus methane gas perhaps?). 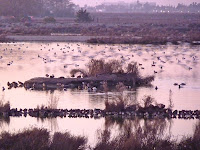 At the end of this path at Redwood Point, there was a closed gate, announcing this habitat restoration area was closed to the public. The path/area beyond this gate is shown as a gray dotted line on the Bay Trail map. 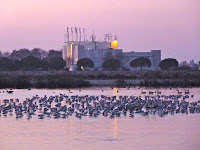 I returned to Radio Road, and walked northwest on this road past the large duck pond that was chock full of ducks and other birds -- and was filling up with Canada geese who were flying in and landing, presumably to spend the night -- to an old transmission tower and radio station. The radio station is now a church. Then I walked then out to the end of a spur trail (not shown on map) -- to the end of a wood observation platform and back. 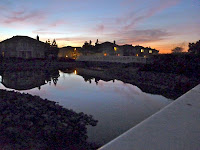 I continued northwest crossed a small bridge, turning right, toward the Bay, and began a loop (shown as a red line on map) around a housing tract -- pausing to walk out to the end of two more wooden platform extensions/viewing areas with interpretive signs -- which I couldn't really see in the dark. Eventually I came to a paved (asphalt) section that forked off in another direction. (I'll check this out tomorrow.) 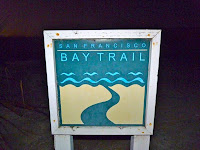 I kept heading around the loop on the map, south and then southeast along a paved (asphalt) path with arrows, until I crossed Redwood Shores Parkway, where I headed back to Radio Road.

I was hoping to stop at The Bay Leaf Cafe (part of a  larger building), but it was closed, so I did not have a chance to stop there to eat. However, there were two rabbits grazing on the lawn nearby, that ringed this set of office/commercial buildings (The Pointe at Redwood Shores).