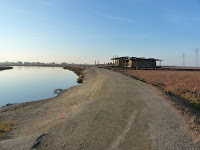 Today I was joined by family in town for the holidays. Thanks to mom, sister Lisa and nieces and nephews for accompanying me on the packed dirt portion of this loop trail (shown as red line on the Bay Trail map shown at right).

We walked from the Lucy Evans Interpretive Center, which was located at the end of Embarcadero Road, past the Duck Pond. 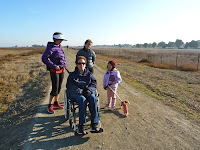 We headed (northish) on the packed dirt portion of this trail, around the Palo Alto Airport. We stopped at the point where we were even with the end of the runway and watched small planes take off above us.

I continued to walk around this loop (red line on Bay Trail map), around the golf course to the Baylands Athletic Center, to Geng Rd., to Embarcadero Rd., past the Duck Pond (pictured), and back to the Lucy Evans Interpretive Center parking lot. Some of this loop (along Geng and Embarcadero) I'd actually covered already earlier today. After saying good-bye to family, I decided to visit "Rail Alley" behind the Interpretive Center. 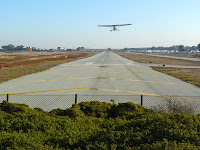 The California Clapper Rail is an endangered bird that lives in very few places around the Bay; and in part because of its rarity and brownish coloring, it can be hard to spot. The clapper rail's relatively loud and distinctive cry/call is what birders are often more familiar with. Sightings are rare.

So, when I walked along the wood plank pier to Rail Alley behind the Interpretive Center, I wasn't expecting much. However, there were two clapper rails mucking about in the mud at low tide, and feeding on -- or at least poking around -- shells/shellfish with their beaks. It was a rare treat to see (and hear) them. 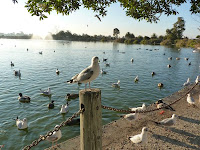 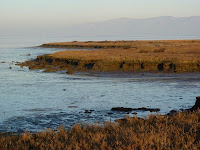 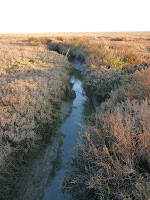 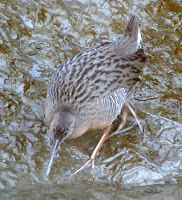 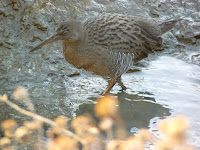