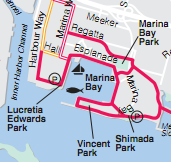 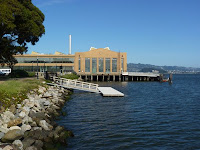 Today's early evening walk in the Marina Bay area of Richmond first took me out to Sheridan Point - near what had been an old Ford Motor Co. assembly plant building, located at the end of Harbor Way. The renovated space housed the Craneway Pavilion event space and Boilerhouse Restaurant, and commercial space for a solar company. (And it looked also to be the future site of a planned Rosie the Riveter WWII Home Front National Historic Park Visitor Center.) 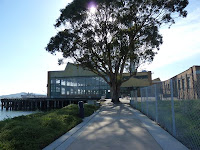 After this walk by the waterfront with a view of the San Francisco skyline in the distance across the Bay, I headed east toward Marina Bay, and followed the broad, paved path around the harbor area. I passed two more places to stop and get something to eat: Salute, and Amini's By the Bay: Groceries and Delicatessen. I would have liked to have stopped to try one of these places, but it was starting to get dark.

As I continued around the harbor, I overlapped a bit with yesterday's walk. I stopped to spend a bit more time looking at the Rosie the Riveter Memorial, and then I "re-walked" the east side of the harbor to  a short segment connecting the harbor with Shimada Peace/Friendship Park. (I had missed this cut-through yesterday when I chose to walk out to Barbara and Jay Vincent Park.) 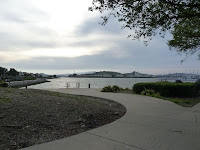 I then re-traced my steps, back through the Rosie the Riveter Memorial area to Marina Bay Park, to walk a loop on Regatta Boulevard. I walked west on Regatta until I reached Marina Way South, where I turned left and returned to my car, parked in a public space at Lucretia Edwards Park. By the end of the walk, sunny skies had turned dark, cloudy and very windy. 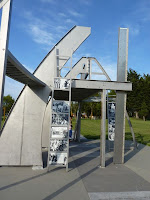 The above description will sound quite confusing unless you have a map. Fortunately, there were some Marina Bay Trail Guide maps near the Ford Assembly Building. I recommend picking one up if you're in the area.