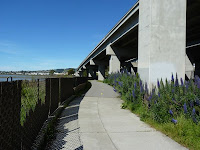 Today's walk was very straight-forward. I parked in the Albany Bulb area; but, unlike the Bulb, this paved, asphalt bike/pedestrian trail (shown as red line on map) was very formal, and was fenced in on both sides; so meandering on different trails was not an option. (Note: this didn't stop two people who were up to their knees in mud harvesting something in the mudflats. Shellfish? Biological samples? But, I digress.) 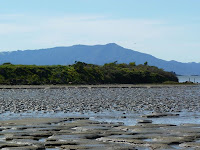 Instead, during an unseasonably warm spring afternoon, I made my way north, from Albany toward Richmond, with the Albany mudflats and Bay on one side, and Highway 580 (filled with rush hour traffic) on the other side. Across the Bay, in the distance, Mt. Tamalpais can be seen on a clear day.


Like the Bulb (where I walked yesterday), there were occasional bursts of spray painted art and slogans. "More Art and Less Cars" read a message left by one anonymous commentator. And, given the contrasting views on either side of the path, I guess I can understand that sentiment. "Justice 4 Oscar" exhorted another stenciled message. 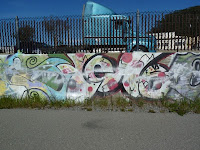 After reaching the Costco (store) in Richmond, I turned around and walked back along the same path, being careful to look both ways to avoid being hit by an intense-looking bicyclist or two whizzing past.
Wildlife Sightings:
1 mockingbird; 9 little brown jobs (LBJs) + 2 finches; 3 hummingbirds; 5 dark, unidentified flying bugs (UFBs); 4 butterflies (1 orange and black, 1 yellow and black, 1 yellow, 1 white); 13 sea gulls; 1 black and red spider; 1 pillbug; 1 egret; 2 ducks 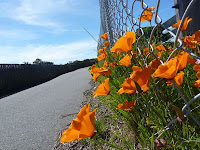 Posted by Corinne DeBra at 2:49 PM