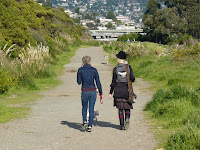 The Albany bulb is an outcropping of land into the San Francisco Bay shaped like an exploding light bulb. And ideas and art, applied via spray paint cans on every available hunk of broken concrete, may leave you feeling you've landed on a different planet. 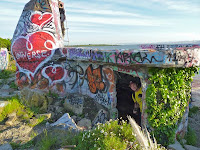 Something about wandering around the trails (not all shown) at the Bulb made me feel I'd just reentered a 1960s timewarp. I am estimating the mileage. This is not a place with formal trailmarkers. It was more like an informal subdivision, with some homeless encampments at the end of a few neatly packed, dirt cul-de-sacs.

That said, the Albany Bulb was very captivating in an odd way. There were lots of dogs and dog owners out for walks. A small beach not far from the parking lot, was occupied by happy-looking children, and pooches fetching balls and sticks in the water. 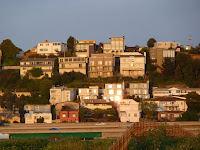 At the end of the trail/bulb there is a concrete structure that has been painted over in many colors and tags. Surrounded by a bit of green grass, ivy and some small wildflowers, it looked like a cross between a kid's fort and an adult art outpost. (Do children build forts or little hide-outs anymore? Or are they all cooped up inside?)

Hummingbirds buzzed around in the tops of tall bushes and medium sized scrub treetops, and a variety of water birds could be spotted from the rocky shores of this peninsula. 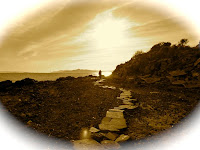 Thank you to Matt for walking the Bulb with me. We essentially walked a large infinity symbol (figure 8) shape, before heading back to the car. After walking the trails at the end of the bulb, shown as green park area (detailed paths/trails not shown) on the Bay Trail map, we walked toward the east end of Buchanan (rust, red colored line(s) on map), where we picked up a (packed-dirt/mud) informal loop trail. This path circled around a large, fenced off burrowing owl habitat restoration area, and had a view of the Albany mudflats on the northeast side and a view of houses on the hill to the east.
Wildlife Sightings: 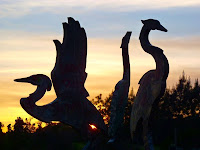 Posted by Corinne DeBra at 4:34 PM