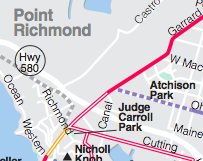 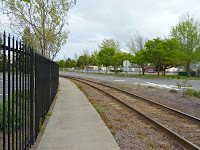 Today I began walking north on South Garrard Blvd. (under 580, and a few blocks beyond - double red lines trail on map). I also finished walking the short stretch of West Cutting Blvd. (between Dornan Drive/Garrard Blvd. and Canal Blvd. - also shown as double red line trail on map) that I'd missed on an earlier walk. Both of these areas had sidewalks and reasonable setbacks for bicycles, or a dedicated bike path. A train crossing yielded an opportunity to watch graffiti-decorated train cars rumble by. 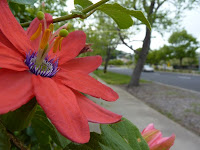 Sometimes it's not the physical distance traveled, but what you see instead. Today was one of those days. Darkening skies and light rain cut my evening walk time short around 5 p.m. I had wanted an excuse to wander off the trail by a few short blocks to visit downtown Point Richmond. So, I was perfectly content to wander west and drop into the Refined by Fire Art Gallery (103 West Richmond Ave.), in downtown Point Richmond, where I saw the only "wildlife" of the day -- a friendly dog named Mattie, who belonged to gallery owner, Steven J. Nuss. 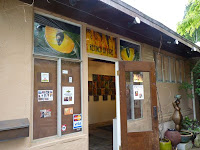 It was here in front of the gallery, that I also met a gentleman who mentioned he had made a trip around San Francisco Bay (in one day) awhile back, taking (only) various modes of public transportation.
I hope he'll contact me, so I can list his name on this site. His trip is another great example of how accessible the Bay Area is to anyone willing to venture out of their own city or comfort zone. 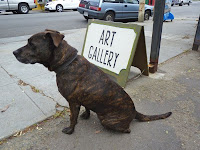 Next up: the "dicier" area of Richmond that I've heard about. And then I'm looking forward to attending the April 30, '11, opening of the new landfill loop trail in Richmond up toward Point Pinole. After this, I'll resume my clock-wise walk around the Bay, by returning to the Berkeley Marina area, where I left off further south.

Wildlife Sightings:
0 birds, bugs or small mammals; Mattie the dog.
Posted by Corinne DeBra at 11:14 AM