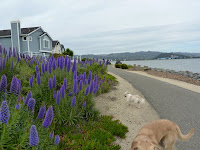 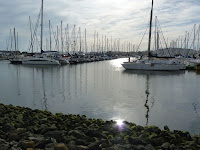 I started my walk at Shimada Friendship Park (located near Peninsula Dr. and Marina Bay Parkway). Richmond's sister city, is Shimada, Japan. (In Marina Bay, there were also tributes to Japanese American citizens and the challenges they faced during World War II.) When I arrived at the Park there was a group barbequeing and a few individuals fishing, and several other walkers, some with dogs. I walked east toward Meeker Slough and continued the loop back up toward Regatta Blvd. and eventually made my way over to Marina Bay.

On all sides of this loop facing the Bay, there were wonderful Bay views, and lots of birds. In particular, there were great views of Brooks Island (seen at the horizon line above flowers at right). Brooks Island, in San Francisco Bay off the coast of Richmond, is maintained as a preserve. Advanced permission is required to visit this island. 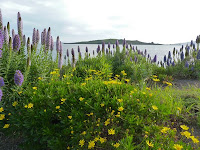 An extension of this loop took me out to a point that also formed the south entrance point of Marina Bay. At the end of this point was Vincent Park. I enjoyed taking pictures of a bumblebee collecting pollen, as well as watching a few happy dogs stroll by with their owners. Wide vistas of the harbor and boats in Marina Bay and the San Francisco Bay are visible from this park/point.