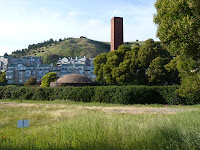 Today's walk started at Miller-Knox Regional Shoreline (park), near the intersection of Dornan Drive and Brickyard Cove Road, in Richmond, CA. I walked east on Brickyard Cove Road (dotted line that became a red line on the Bay Trail map, shown); I passed domestic and wild flowers in bloom, and what was left of an old a plant that used to produce, you guessed it, bricks.

This was the third brickyard I recall seeing on my 1,000-mile walk around the bay. The different brickyards were gradually closed when newer building materials replaced the red clay bricks being made. A few old brick structures (kiln, chimney) remained in this site, mixed in with a relatively new(er) housing development. 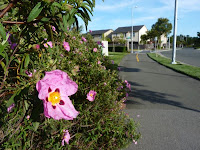 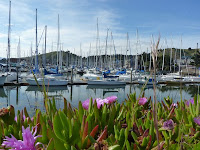 I walked out to the end of Sandpiper Spit, a street -- that I (wrongly) thought might be part of the Bay Trail. However, this accidental detour did provide the opportunity to catch glimpses of the Bay, between houses built out on pilings over the water. Some houses looked like they were connected to docks and boats in the harbor.

Despite the presence of housing developments and marinas, I spotted several types of birds in this area, including two black oystercatchers (birds).

As I continued to walk east on Brickyard Cove Rd., this Road turned into Seacliff Drive, which eventually ran into Canal Boulevard. I turned left onto Canal, walking roughly north on Canal, until I reached the native plant nursery at 601 Canal Blvd. -- the point where I'd previously left off -- where I turned around to walk back the same way I'd come, over a few hills and past a few oil storage tankers. 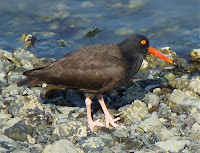