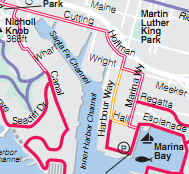 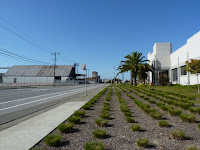 Beautiful Saturday late afternoon-to- early evening for a walk in Richmond. Even though most of today's walk was along surface streets (double yellow and double red lines on map), it was still interesting. The sky was blue and the temperature was just about right for walking. The shadows started to creep into the picture toward the end, but the spring days are also getting a few minutes longer each week. 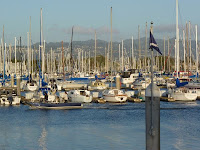 I started my walk by revisiting Sheridan Point (near the end of Harbour Way South), and then walking back up Harbour Way South toward Cutting Blvd. This mixed commercial and industrial area is also a transit corridor for railroad traffic. I watched a few trains to go by near Wright Ave. before I reached Cutting.

Along Cutting Blvd. there were several boat, yacht, and marine-related businesses on the bay side of the road. A bit before I reached Canal Blvd., there was a very small park (on the south/bay side of Cutting) accessible via a small cut-through. The park is visible from Cutting if you're on foot, but you may miss it if you're traveling by car.  I then walked part-way down Canal Blvd., before walking back. 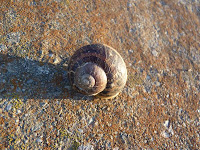 After stopping for a quick bite to eat, I walked down Marina Way, and east on Hall Ave., to the Harbor Master's at Marina Bay and watched a few boats coming back into the harbor area before sundown.