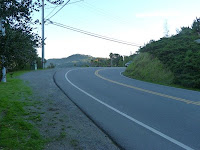 Today was another short walk on a December afternoon with clear skies, due to getting out late and the sun setting early. Sadly, as I walk further north along the San Francisco Bay Trail (and toward the farthest point away from my home), more time is spent on driving and less on walking when the days are shorter.

I have been trying to walk stretches of Paradise Drive (not technically part of the developed Bay Trail and shown as a dotted line on 2012-2013 Bay Trail map set) for a few weeks now. However, it's not a stretch of road I hike after dusk, due to narrow setbacks and cars and bicycles that tend to appear suddenly around corners. 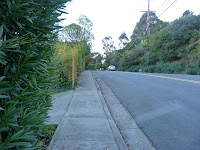 However, today's section of Paradise Drive was a bit safer than previous sections.

Some areas had wider setbacks, and today I was actually walking on a cement sidewalk (something I hadn't seen in awhile). Generally a sign that I'm returning to a more developed area. 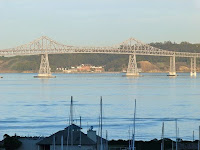 Sights included a scenic view of San Quentin prison; the Richmond - San Rafael Bridge, a housing development down by the water (Paradise Cay); and interesting rocks and trees.

I walked until I reached the intersection of Ranch Road and Paradise Drive, before turning around and heading back.

I smiled as I passed carports on Paradise Drive with million dollar views of the Bay. (These carports were, arguably, nicer than my entire house.) 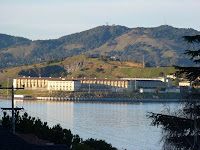 And, through the trees, I caught sight of East Brother Light Station, located on a small island in the bay with a Victorian Bed and Breakfast that will accommodate overnight visitors (by reservation only). The two Brother islands (East and West) could be glimpsed in the far distance, through/under the Richmond - San Rafael Bridge. 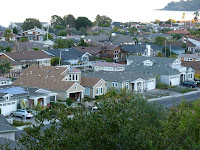 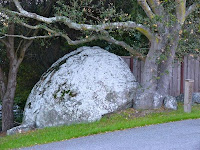 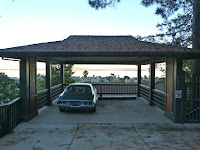 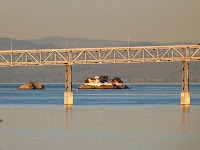 Posted by Corinne DeBra at 9:14 AM