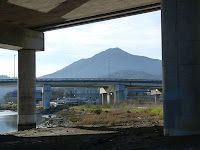 Most of today's walk was along asphalt paths or sidewalks through Greenbrae and Larkspur. However, there were stretches along roads (e.g. the dotted green line on the map, near San Quentin Prison) that were less welcoming than others. The remaining bits were mostly optional packed dirt paths along the shore. Mount Tamalpais was visible from multiple locations.

To explore the area, I walked south first, to get under Highway 101, and toward the Marin Rowing Club. I went down some stairs and passed big freeway cement pillars, then went back up stairs and up and over freeway overpass -- and followed a fairly narrow combined bicycle and pedestrian walkway, toward the Marin Storage / Marin RV Park on Redwood Highway. 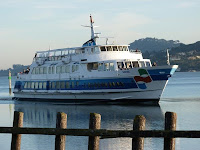 I turned around after I'd reached (and browsed inside) Toy World. I went back over the overpass on the East side, took path at the end this time (instead of stairs and boardwalk).

I turned right at an orange detour sign to an asphalt path around the Larkspur Ferry parking lot. I walked around the periphery of this peninsula-shaped parking lot (shown as a small green loop on the 2012-2013 Bay Trail map set). I then made my way up and over (detour) to Larkspur Landing (and shopping center). 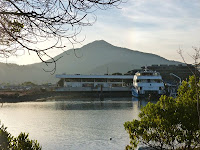 I crossed Sir Francis Drake Boulevard to get to the Marin Country Mart shopping center at Larkspur Landing to buy something to eat. Since my first walk around the bay (2009-2011), several new shops had opened, and it looked like the whole shopping center may have experienced some improvements. There appeared to be more options for food stops including: Berry Bliss Yogurt, Marin Brewing Company, Rustic Bakery and Cafe (organic), and many more*. 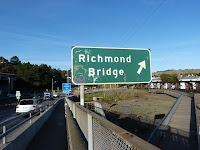 After a frozen yogurt stop, I continued along Sir Francisco Drake Boulevard, and walked along water toward San Quentin Prison, passing a very tall sculpture of Sir Francis Drake, a tall red brick chimney that was part of an old brick kiln, and some new buildings around this structure. The brick making facility (a California Historic Landmark) now houses a restaurant, The Melting Pot.

I enjoyed walking past lush, green grass along paths -- as it had looked on my first walk a few years ago. (I've passed through this area in the winter both times.) 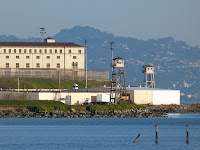 As I approached San Quentin Prison, the trail became a setback along Sir Francis Drake Blvd., near relatively rapidly moving traffic. In part because of this, I turned around at the first San Quentin sign gate/entrance/driveway. (I was reminded that prisons are not meant to look approachable; neither do they want to attract random visitors.)

On the way back, I walked the side of the trail closer to the road - through City of Larkspur Remillard Park, a small park sandwiched between Sir Francis Drake Blvd. and the bay. I then continued on Sir Francis Drake, back across the freeway, and to the Larkspur Ferry parking lot.

Posted by Corinne DeBra at 9:15 PM