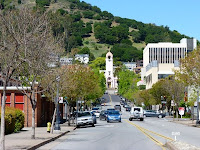 Most of today's walk was on sidewalks and paved surfaces in the downtown area of San Rafael (the largest city in Marin County), with a few short stretches on packed dirt/gravel. From my starting point on B Street, I stopped at Safeway and then walked through their parking lot, where I turned left onto A Street (shown as solid green line on Bay Trail map). On A Street, I enjoyed seeing a garden and architectural details on one of the few remaining older houses.

From A Street, I turned right onto 3rd Street (shown as a broken green line on the 2012-2013 Bay Trail map set). Ambling along 3rd Street, I passed commercial buildings and restaurants, some painted in bright colors. 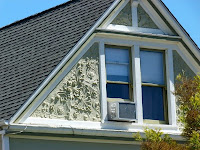 Continuing on 3rd Street, I passed the transit center and walked under Highway 101 where some of the concrete support pillars had been painted with flowers and butterflies.

I continued on third until I reached Grand Avenue, and made a right turn on Grand. I crossed over the San Rafael Canal, and passed a car dealership on the left. I made a left turn on Francisco Boulevard East (a broken green line on the Bay Trail map) until I reached the end of the Bay Trail, and extended my walk to include a detour on Canal Street. 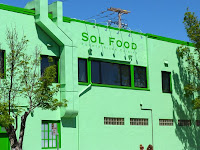 From Francisco Blvd., I made a left on Harbor Street (shown only as a white line on the map), then a left on Canal Street. I followed Canal a short distance to the end, to a small park near the water -- a branch off the main canal). The little park looked a bit forlorn -- with dry grass, two trees, an old fence, and a partially overgrown cement walkway; but it did provide an overlook to the water. 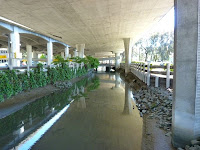 From here, I turned around, and walked back to Francisco Blvd E.,  where I headed northwest. I stopped at (made a right turn into) Harbor Center, to research a few small restaurants. I stopped at the Kababbq for an afternoon meal.

After eating too much good food, I walked the last, short stretch of trail (broken green line) along the canal (between Yacht Club Ave. and Grand Ave.), before crossing the canal, heading east on 3rd for a bit (to Whole Foods Market), then heading back to my car. 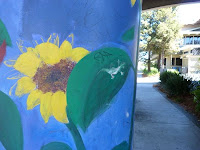 I then drove a short distance to continue walking on 3rd Street, later today. (See next post.) 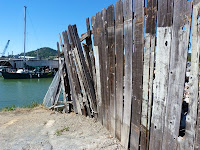 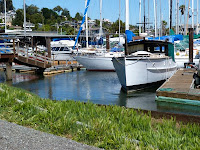 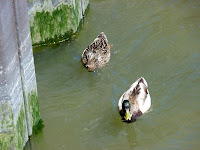