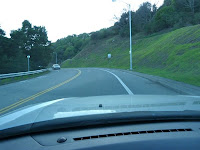 Today I walked the relatively short, curvy, hilly, southern end of Andersen Drive in San Rafael, to Sir Francis Drake Boulevard (toward Larkspur), and then back down Andersen Dr. (Andersen is shown as a diagonal, solid dark green line on the Bay Trail map set), as far as Orchard Supply Hardware.

Because I was walking relatively close to fast-moving vehicle traffic I was hiking at a pretty brisk pace -- eager to finish the stretch along Sir Francis Drake Blvd. (shown as less developed, dark green dotted line on the 2012-2013 Bay Trail map set). I did not walk far along Sir Francis Drake Blvd. The closer this road gets closer to the Richmond-San Rafael Bridge, it seems the dicier it gets. 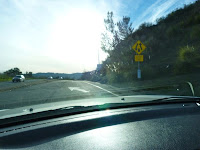 Also, I covered this stretch quickly, because I wasn't stopping to take photos every few minutes. (Sadly, I accidentally left my camera in the car on this segment.) So, this is a short entry. (The two photos shown at right were taken later in the day through a car window.)