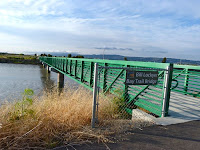 Some of the trails in Oyster Bay Regional Shoreline park had paved (asphalt) trails (shown as solid red line on Bay Trail map), and the rest of the trail was packed dirt (unpaved). The unpaved portion of the trail does not show up on the current Bay Trail map.

However, that may change in the future if there are further improvements made. In any case, the unpaved trail was fine for walking for me this evening. The ground was dry, and I made my way directly, past a large materials recycling/recovery facility (with lots of sea gulls flying overhead), to the Bill Lockyer Bay Trail bridge, where I'd left off on a previous walk -- where I'd crossed this bridge from the north side (Oakland Airport/Airport trail).

I then followed a paved (asphalt) trail (shown as a solid, red line on the Bay Trail map) around this ear or half-moon shaped, rounded outcropping of land -- with a small hill in the middle -- as it curved back to shore again. 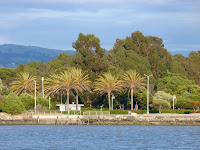 I'm guessing the area's sculpted shape means the Oyster Bay Regional Shoreline park area was once a garbage dump or landfill area that has been reclaimed, and converted to a park area, like many shoreline parks in the Bay Area. 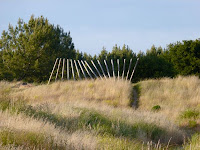 The upper part of the (solid red line) trail was a great area for aircraft fans of all ages to watch planes take off and land at Oakland Airport. 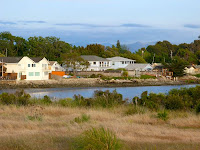 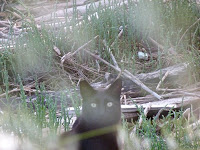 The last part of this walk offered views of the San Leandro shore to the south, including homes by the water,  El Torito restaurant, and a park area. And further walking led to paths up the hill and to picnic areas before reaching the parking lot again. 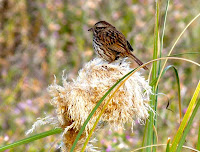 There were lots of swallows and smaller birds darting about before sundown, and other wading birds (egrets) in the area under the bridge, in the shallow water, mudflats and grasses area on the north side of this walk.

I saw one black (feral) cat in amongst the grasses that looked like it may have recently become homeless. I say recently, because this cat looked pretty healthy. My soapbox plea for the day: Please don't drop off unwanted pets or cats in the Baylands. It's a hard life for cats/pets and the nesting birds they may have to hunt for food there as well.