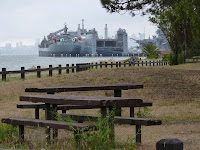 I played cat and mouse with the weather today in Alameda. I started walking in Alameda Park, but hadn't gotten more than 50 yards from the parking lot when a light rain starting falling (again), so I aborted this walk, and started to drive away, but then the rain stopped. So, I re-parked near Encinal High School -- a few blocks away (double yellow lines on map) and started walking again. Encinal High School has a jet mounted and parked in the front of the school. (The school's sports and other teams are known as the Encinal Jets I believe.) This is another symbol of times gone by -- when the island of Alameda once housed a U.S. naval air base. 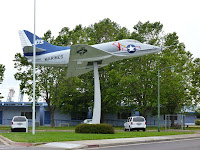 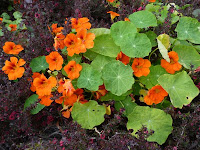 This afternoon I walked the section of Bay Trail (shown as both solid red line on Bay Trail map) that extended from Main Street to Central Avenue. For a few blocks, the trail (on the east side of Main street) is coincident with a grassy strip park area. I walked from West Atlantic and Main Street (close to where Main Street turned into Central Avenue) to the intersection of Central Ave. and 3rd Street, a block southeast of Encinal High School. The latter area was more heavily residential and shown as double yellow lines on the map.

I also walked the double yellow line spur (long, narrow road/looks like a driveway) to Alameda Park shore area. Watch for signs on the fence for the Bay Trail, and the Encinal Boat Ramp.

Had the weather been better, I would have gone off-trail and walked a few blocks west and toured the U.S.S. Hornet (ship) that is open to the public on certain days. There are also nice views of the San Francisco skyline in the distance here. Maybe later in the week. 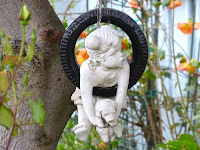 The Main Street-to-Central Ave. trail segment was a mixed residential, commercial and industrial area that had sidewalks or setback areas most of the way; and traffic was relatively light, making for a relatively easy walk. If you're on a bicycle, the road narrows and becomes a bit more crowded in the double yellow lined area.