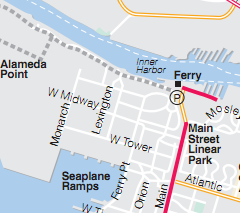 I had never taken a ferry boat into Alameda, and so I was fascinated to see very large cargo ships and small sailboats jostling for position in the Inner Harbor area near the Alameda Ferry boarding area. This was a great place to see these huge cargo behemoths up close as they slowly glide in and out (with the help of small, intrepid tugboats at their sides). 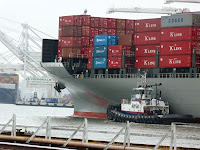 From the paved (cement and asphalt) ferry and pier area trail (solid red line on Bay Trail map), I walked southish on Main Street (double yellow line section on map),  through an extended area that had once been part of, or adjacent to, the Alameda naval and seaplane base. The large, open paved area is still in transition, with some areas being fenced off, and other large hangar-sized buildings being renovated and occupied by commercial tenants. 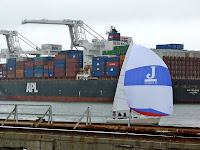 I walked as far south as West Atlantic before turning around, largely due to the threat of rain. Best not to be too far away from the car, especially if you forgot to bring an umbrella.

Today was a drizzly day, and, while I was initially able to protect my camera with a piece of paper from light mist, the mist turned into a heavier sprinkle on my walk back to the Alameda Ferry area on Main Street, just as I was (unsuccessfully) trying to photograph a group of chickens and roosters -- through not one, but two layers of wire fencing. I believe the chickens were part of the Ploughshares Nursery that was closed today. 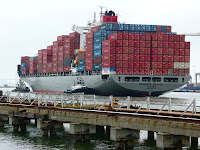 Finally admitting defeat, after snapping several blurred shots of feathers and beaks with a telephoto lens, and not wanting to break my camera by getting it wet, I was forced to duck into a building nearby -- which, happily, turned out to be Rosenblum Cellars (one of two wineries I believe in in the northwestern part of Alameda). 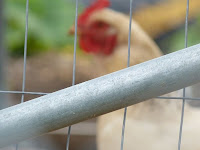 Thank you to Jackie for showing me around the Rosenblum Cellars space, and for information on the company's zinfandel red wine lineup. The company buys wine grapes from several vineyards and estates in California and age and bottle their own wine.

On a sunnier day, there would be seating ouside. The wonderfully cavernous space inside contains different tasting, sitting and event areas. This winery is within easy walking distance of the Alameda ferry, making it a nice stop for those traveling across the Bay. 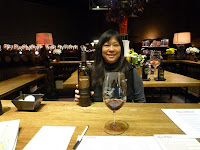 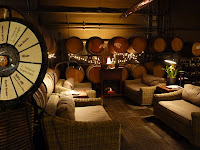