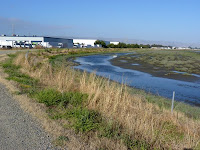 This evening I walked the second (longer) part of the Eden Landing trail from a parking lot in the north (a little south of Highway 92) southeast, toward Hesperian Blvd.

On the older set of (hard copy) Bay Trail maps that I have, much of this trail still appeared as a gray, dotted line, so I was pleasantly surprised to discover that this trail had been extended since the maps were printed. (See solid red line trail on the Bay Trail map above right.) This trail now ends (or begins, depending on where you start) at a housing development near/off of Eden Shores. 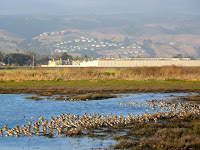 Before I reached the end, I had to slow down my pace a little, when I noticed I had a walking companion -- a skunk who was ambling around the edge of the trail, and headed in roughly the same direction that I was. I whistled a tune, and even starting to talk to the skunk (all the while, not getting closer than 20 feet from it), in hopes of not startling it and causing it to spray in my direction. But the skunk didn't appear to notice me. Perhaps this one was hard of hearing. Eventually it shuffled off the path and disappeared under a fence into long grass; so I could finally resume my walk before dark. 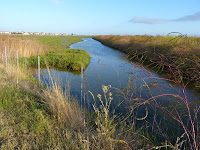 At the end of this trail, there was a private channel (I would call it a moat), with a gate (that I believe is locked at certain hours) that separates the end of this trail with a housing development. And there looked to be a small parking lot on the other side of this gate that was part of this community. For those wanting to park closer to civilization, it looked like this parking lot (assuming it's open to the public) could be reached by turning onto Industrial (from Hesperian) and then to Marina, and Eden Shores. Once inside the housing development, look for the playground area near the Bay, and for Dune Circle, where the trail starts.