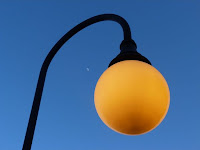 I don't always eat before walking, but when I parked in front of Pasta Pelican, I felt tempted to have a light dinner; and I thought there might be some good views of Oakland, across the water, from a table by the window.

The views were nice. After dinner, I walked north a short distance, until I reached the blank (no trail) area on the Bay Trail map. I then walked south along the water, headed toward Shoreline Park. 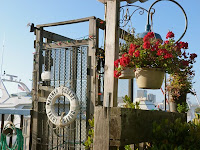 The Shoreline Park area of trail (solid red wavy line on Bay Trail map), off Marina Village Parkway, was beautiful; and dozens of Canada geese, a few black-crowned night herons, and a smattering of ducks, sea gulls and crows apparently thought so too.

A marina area, with boats in the water, offered views of Oakland beyond appeared on the northeast side of the paved (asphalt) walkway, and a grassy, park area, with water features and trees, was on the southwest side of the trail. Thank you to Martha, another walker I chatted with while on the move, who lived in the area; it was fun to find out a bit more about the harbor/marina/yacht club area(s). 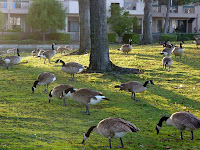 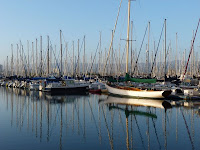 Just a short distance further northwest giant cargo ships lumbered through the Inner Harbor, but all was tranquil and calm here.
I turned around when I reached Triumph Drive, near Point Marina Vista and Oakland Yacht Club, where I'd left off on a previous walk. And, even though the sun was setting, I decided I had time to walk the Posey Tube -- (shown as a yellow-gold colored solid line on the Bay Trail map) connecting Alameda with Oakland.
To find the entrance to the Posey Tube, the second oldest underwater tube of its kind, look for a neutral-colored building or structure (see picture at right) that looked like it could have been influenced by both Art Deco and Modernist architectural styles of the 1920s. On the Alameda side, you'll need to cross a road (roughly indicated by two parallel yellow-gold colored lines on the map) and approach it from the southish side -- as, at least when I walked there, only one side of the tube is open to walkers. 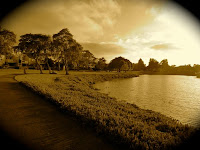 A note of caution about walking the Posey Tube: the narrow sidewalk you'll be walking on is barely wide enough for two people to pass each other.
A bicyclist I met, on the way back to Alameda, kindly upended his bike to let me squeeze by him. So, if you bicycle through the tube and meet another bicyclist going the opposite way, I'm not sure how this would be handled. 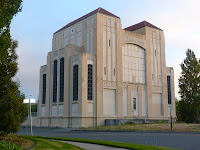 It's also very loud in the tube. The acoustics are such that sound seems to bounce off the tile walls and be magnified and jumbled around.

However, it was a fun experience to walk through here. This may not be everyone's idea of fun; but I liked the adventure of walking under the water, and popping out near 4th Street and Harrison in Oakland on the other side, and thinking this must have been a relatively novel engineering feat almost 100 years ago. 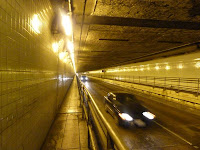 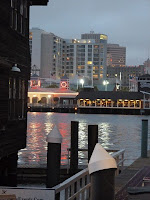 Posted by Corinne DeBra at 3:17 PM