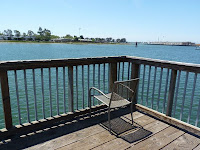 Another quick, short segment this afternoon. Would love to have walked a bit longer, but need to get home for a meeting later today. Life does get in the way of walking the bay. It's important to actually schedule or block out time for crazy adventures in one's schedule. 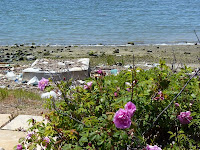 I continued to walk southeast along the Embarcadero in Oakland this afternoon. I walked the trail along the water's edge until it ended at 1363 Embarcadero; and then I walked along Embarcadero, past a small beach and the San Antonio Fishing Pier, as far as Harbor Masters office (Embarcadero Cove Marina, Central Basin), just south of a Motel 6. After that, I turned around and walked back, northwest on Embarcadero. After getting back to my car, I enjoyed a nice cold coffee drink at Starbucks at 1211 Embarcadero; the patio in the back faces the water, and has a view of Coast Guard Island. 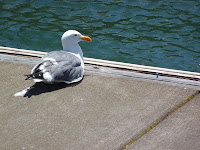