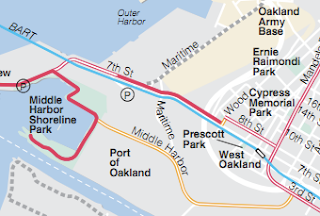 If you like big trucks and seeing how things work, this highly industrialized (large loop) route may be of interest. I began this walk in the relative serenity of Middle Harbor Shoreline Park, with geese and goslings running to and fro. 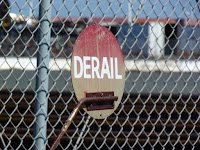 From the park, I crossed the street, and I entered the world of loud rumblings and heavy moving metal.  I walked on the paved (asphalt) path east on 7th Street (double red lines, then solid red line on Bay Trail map), toward the West Oakland BART (Bay Area Rapid Transit) station. You'll be walking in parallel with the BART train tracks (blue line on map). Semi-trucks were whooshing by on 7th St., busy dropping off goods to waiting cargo ships; and many were leaving, having accomplished their mission for the day. 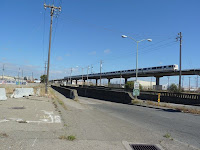 And, except for a somewhat dicey, necessary street crossing near the intersection of 7th and Maritime, all went very smoothly. (I needed to cross the street because the sidewalk was ending under BART, and I needed to get to a sidewalk (on the northeast side of 7th) to enter into the underpass and into the Cement Grant Canyon (not its official name). There isn't really an elegant way for a pedestrian to make this crossing, but if you're careful, and look both ways, it's not a problem. Just remember those big trucks may need extra stopping distance. 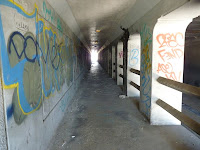 You will be treated to a free exhibition of graffiti/street art in the underpass/gallery. And, then you'll pop out into what I call The Cement Grand Canyon. It's a bit intimidating (so much so, that I forgot to take a picture), but there is a sidewalk, crosswalk and walk lights for pedestrians, so just toddle through and be amazed at all the concrete that went into this place. You will not see any green here; wildlife sightings may be limited to small bits of detritus: a rusty screw or two, a little dust, a muddy/oily shred of cloth, and a bit of broken glass and a chicken bone -- at least I think that's what it was.

Next, on your right, will be a gigantic post office building/facility -- probably a major hub of some sort. And then, before you know it (after a bit of construction on 7th if you don't dogleg over to 8th at Wood 1st), you'll be at the West Oakland BART stop on your right. I turned right at Martin Luther King (MLK) -- aka Mandela Parkway on some maps)/3rd St., and followed 3rd St. to Adeline. Cross the street to the far (southeast) side of Adeline to the crosswalk which, upon heading right/west, will take you over an overpass and back to Middle Harbor.

The final leg involved heading west on Middle Harbor (road), shown as double yellow lines on the Bay Trail map. There are not sidewalks on this road, so I would advise walking on the packed dirt shoulder where possible. Depending on the time of day, you may also have the option of stopping at one of several lunch trucks parked along the road, for a sandwich, a burrito, or something to drink along this stretch. 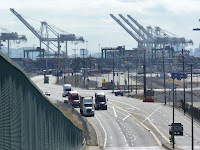 While this is a gritty walk, especially on a windy, particulate-filled day (and probably not the best walk for families and/or children), there were some very interesting sights to see. Being near the Port of Oakland, and the heart of several transit centers, I felt I was at the infrastructure heart of what keeps the flow of goods and services moving.