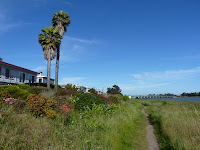 I started today's walk where I left off previously in Alameda -- at the end of a paved (asphalt) path along Shoreline Drive. At this point, a paved (solid red line) trail turned into a unpaved, packed dirt and sand path (gold colored line on map) that was narrowed in parts, with waist-high grasses on either side. This path will take you to the pedestrian and bicyclist drawbridge (Bay Farm Island Bridge -- shown as solid red line on map) that crosses over to "Bay Farm Island" (primarily a residential and office park area) on the north side of the same peninsula where Oakland Airport is located. 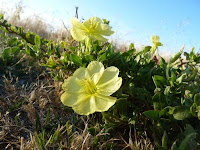 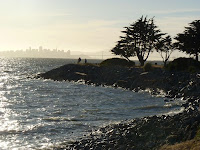 After crossing the bridge (and walking a very short purple trail segment on the Alameda side of the bridge), I walked east/southeast on a trail along the San Leandro Bay (with views of Oracle stadium further inland) to a Model Airplane Park. I then crossed the street to follow the Harbor Bay Parkway around (double red lines) in a large circle -- past a municipal golf course, an industrial park (home of the Oakland Raiders pro football team, Peet's Coffee and Tea, and a few biotech and other technology companies), and to the Ferry stop. 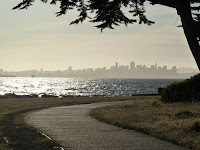 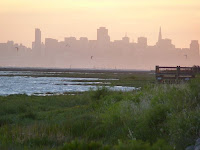 From the Ferry stop the trail (turns to solid red again) along the water merges with a Shoreline Park, and offers great views of the distant San Francisco skyline and Bay Bridge, and the Oakland skyline, on a clear day. It's also very nice at sunset (with the sun setting over San Francisco). I enjoyed hearing the lapping of small waves on the north/bay side of this path. Residential developments were set back on the south/land side of this trail.

I made my way across the same (Bay Farm Island) bridge into Alameda and high-tailed it back through the dirt path area, just as it was getting dark, and after taking a few last sunset pictures, a few with some windsurfers that look like dark specks in front of the San Francisco skyline. (To see them, you may need a magnifying glass.)

By the time I finished, I was hungry, and enjoyed a Greek dinner at Daphne's in the Alameda Towne Centre shopping center a few blocks north from where I had parked (at the south end of Shoreline Drive).

Posted by Corinne DeBra at 1:12 AM