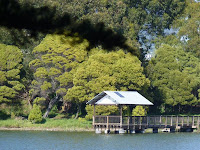 Today I completed my last planned walk in the city of Berkeley. This loop trail around Aquatic Park in Berkeley was a "purple line trail" (as shown on Bay Trail map) -- that ran parallel to Bolivar Drive, and joined with a pedestrian/bicycle overcrossing bridge to the Bayside Bay Trail (red line) near University Avenue.

Aquatic Park was apparently built in the 1930s by the Works Progress Administration (WPA) during the last great economic downturn. The Park consists of a large, elongated water feature that is home to a waterski club, a rowing club, and a number of different birds. (No swimming signs were posted, but I did see at least one dog taking a dip.) The park also had a children's playground area,  picnic tables, and BBQ area.

A freeway (Interstate Highway 80) lies west of the Park, and the San Francisco Bay is located to the west of the freeway. 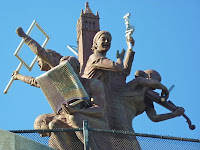 This week continued to be a great week to spot goslings and ducklings. I saw one duck with a brood of 8 ducklings. This seemed to be a big responsibility for a single duck, especially with a few cats spotted nearby, and bicycles, dogs and pedestrians whizzing by the shore.