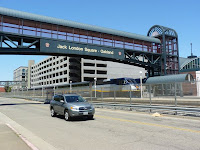 I doubled back today to make sure that I covered this short segment (double red lines on Bay Trail map) along Embarcadero (in between Jack London Square and the Jack London Aquatic Center) that I missed, having taken the waterfront/boardwalk route previously. The two bits of trail run in parallel here from Jack London Square toward Aquatic Park. (The path along the water is shown as a solid red line on the map.) 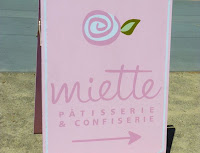 I'm glad I did, as I walked by the train station, and discovered Miette Bakery's Oakland location, where I was able to gaze at glass jars of macarons and a wonderful selection of chocolates.

Also, I had another opportunity to pass the historic buildings commemorating American writer, Jack London, and his life and times in Oakland, Alaska and elsewhere. There was also a metal statue of a wolf/dog, like those in many of London's stories, such as "Call of the Wild." This wolf statue happened to be gazing down at a few (live) pigeons; although there was not much he could do to them being in frozen form. 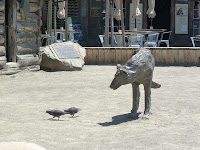