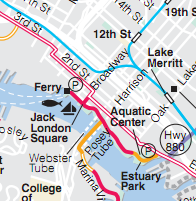 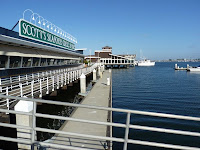 I'm loving daylight savings time in the warmer months; it gives me more time to walk in the evenings before pitch dark arrives. This evening I walked the boardwalk (solid red line on Bay Trail map) at Jack London Square, and surrounding areas. I also walked north - to 3rd St. and Adeline (double red lines on map), and to the south I followed the shoreline trail as far as Estuary Park (near the Aquatic Center, south of the old Rusty Scupper Restaurant, now closed).

Heading northwest from Jack London Square, the 3rd St. area is fairly hard-bitten, industrial and borders the Port of Oakland. There was not much to see of the Bay from here, but it's an important part of Oakland, and has an interesting history of its own. A few of the original brick buildings from earlier commercial establishments remain along or near Embarcadero as well. 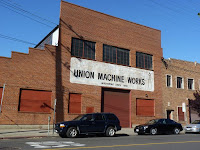 I enjoyed reading about the history of this port area, and its namesake, American writer Jack London. The author of "Call of the Wild" and other books, was born in San Francisco, grew up on ranches, and moved to Oakland with his family when he was 10 years old. "In 1916, he died as he had lived," read one plaque. Great epitaph, although it does conjure up notions of hard living. 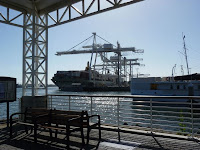 A metal sculpture of a wolf/dog gazed down at the ground near an old log cabin (with a sod roof no less) and a few yards further south lay Heinold's First and Last Chance -- a small, period-designed wooden tavern. Also on view from the boardwalk: views of the Port of Oakland, Alameda. And on the bird wildlife front, there were several Western and/or Clark's grebes in the water, calling to each other, and a few terns darting around above the water.


While many of the shops had closed by the time I finished walking, there were at least half a dozen restaurants in the area that were still open -- including Kincaid's, which I chose as a dinner stop. 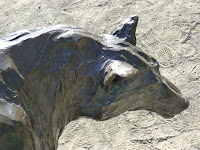 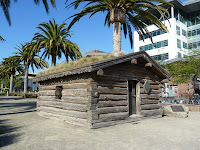 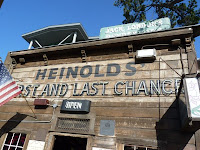