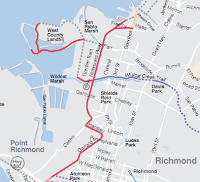 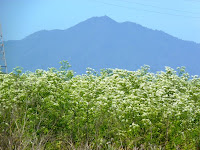 This morning I walked separate segments of the Bay Trail in Richmond: 1.) two short segments in the Goodrick Ave. area, including a "J" shaped, unpaved trail extension of Goodrick that ended at the railroad tracks, near Giant Highway; and 2.) Richmond Parkway -- from Wildcat Creek Park to Hensley Ave to 208 Garrard Blvd. 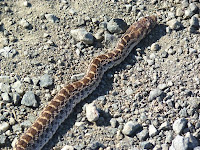 In the last week the green grass is definitely turning straw colored, although the wildflowers were still going strong on Goodrick Ave. I first walked the unpaved extension of Goodrick Ave., which looked like it had been purchased by the East Bay Regional Parks District. But, a road or trail going out to what looked like a small airfield was gated/closed. 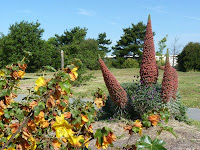 A packed, gravel trail (not shown on map) instead curved east to the railroad trails along Rheem Creek. I turned around when I reached the railroad tracks. While it might have technically been possible to walk north, along the tracks toward Giant Highway and Point Pinole Park, it did not look advisable or legal. No one to ask except for a small snake that was soaking up some sun. 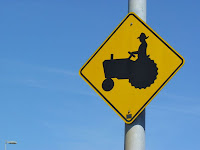 I then walked the paved portion of Goodrick Ave. (gold double lines on Bay Trail map), from the Richmond Rod and Gun Club toward Richmond Parkway, passing a road (Maas Ave.?) that had been barricaded/closed to all forms of traffic. It was a bit confusing; it looked to me like plans in this area were in flux. Looking at another map later, it also appeared that another part of Goodrick Ave. (red line) continued through and past the Richmond Rod and Gun Club at 3000 Goodrick Ave. However, I assumed that this road was on private property, so it did not occur to me to drive or walk into the gun club (where loud target shooting was taking place). So, I may have missed a short fork of trail here. 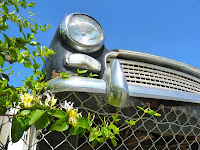 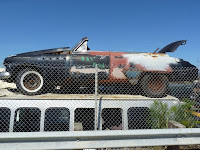 I then drove south on Richmond Parkway to Wildcat Creek Park, where I parked and walked west, following a short segment (red line) trail into the Park. I look forward to coming back next year, when the connecting trail between Wildcat Creek and the newly expanded Landfill Loop trail (approximately 1 mile further north) in Richmond is completed. 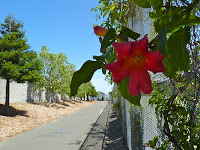 I then walked from Wildcat Creek Park south/right onto Richmond Parkway (sidewalk), passing a wrecking yard with some interesting old cars piled up on top of each other along the way. A relatively short stretch of Hensley Road takes you through a less trafficked industrial area, then back to Richmond Parkway. Be careful to followed Bay Trail signs so you can find the walkway for pedestrians/bicycles, otherwise you'll end up on the concrete trough/roadway with the cars. (I paused and re-parked further down on Garrard at this point, so I could get some water. I then walked north to return to this point, and back again.)