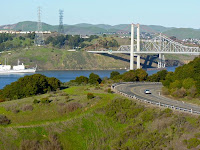 Today was a great day for scenic views. The green grass growing on the hills looked pretty wonderful.  The water in the Carquinez Strait was blue. The sun was out. All good.

West of Crockett, off San Pablo Ave., there is a Vista Point pull-out area. I parked here, and I walked approx. 1/4 mile West on San Pablo Ave. (shown as double yellow lines) -- hugging the guardrail along the way, to the gate/entrance marked as a Regional Park trailhead area. 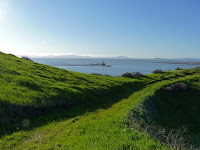 I followed all three trails in this Regional Park area -- the first went West and uphill and then out to a scenic overlook with a bench. I am assuming this was the San Pablo Bay Regional Trail that is depicted as a solid red line on the Bay Trail map shown.


Hints of the oil refinery to the east can be seen and the panoramic view also includes Mare Island, Vallejo, and the Alfred Zampa (Carquinez Strait) bridge. The second trail, a derelict road, went downhill toward the Bay, but this trail ended in an overgrown clump of bushes. The third snaked East -- and I thought it might join up with paths/trails back in the Vista Point area (where I'd parked); but it did not. 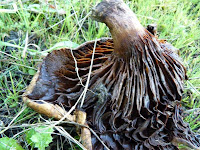 After walking back to Vista Point, I followed two trails that headed down toward the water. But, one seemed to be an unofficial footpath that petered out, and the other packed dirt trail led down to the water and possibly a tanker near the railroad tracks and shore far below.

Last, I have to comment on mushrooms/toadstools. I often see these kicked over on the side of trails (e.g. picture at right). Perhaps people are afraid of them, or have heard that many are poisonous, or think they're bad luck...Hard to tell. I suppose some animal could be picking them, taking one piece and leaving the rest, but evidence that I've seen points to humans kicking them over.