It was good to be able to walk, after a week of rain and canceled walks. I parked on Country Lane Drive and walked to the gated entrance to the California Maritime Academy. After speaking briefly to two young men in the gate house, I was able to walk into and follow the trail through the campus and along Morrow Cove/the Bay (solid red line on Bay Trail map). 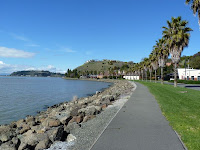 The trail ends roughly near the campus bookstore. (The Golden Bear ship that is part of the Academy is docked nearby -- visible from the campus, and also from the other side of the Strait at the Vallejo end of the Alfred Zampa Memorial (Carquinez) bridge (see photo at right). However, this ship is not open to the public as far as I know.

After exiting the California Maritime Academy campus, I also walked a bit further north (area shown as two red parallel lines on map), along Maritime Academy Drive, as far as the intersection of Sonoma Blvd. (aka Highway 29) and Sandy Beach Rd., before turning back to return to my car.