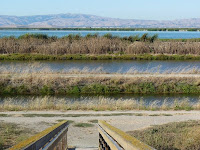 Close to, even in the heart of, Silicon Valley, there are small undeveloped spaces. 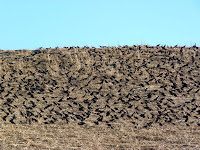 This fairly straight stretch of trail ran from the trailhead close to the Sunnyvale Water Pollution Control Plant north, close to Yahoo! buildings and Moffett Field golf course in Sunnyvale. Actually I walked one trail at the base of a garbage mountain, crossed over to the bay side via a small bridge, and then returned on the trail closest to (and running parallel to) the bay shore.

After catching a glimpse of the two large hangars in the distance at Moffett Field (through the wire fence), I realized I had reached the end of the planned walk. 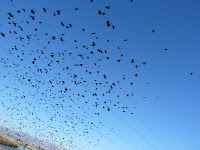 I turned around at the large Don Edwards SF Bay National Wildlife Refuge interpretive sign and hunter sign-in box, another reminder that in a few months ducks will need to travel with extreme caution in this area. I think the large swarm of red-winged blackbirds will be safe. Interesting to see them mysteriously take over part of a garbage mountain hillside, and then disappear and reappear as a large flock of almost 100 birds. Many, many years ago, early visitors to the San Francisco Bay Area described the area as being "black with birds."
I would have loved to have seen this area a few hundred years ago. 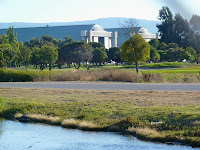 On the way back to the car, I listened to ducks squabbling with each other from somewhere in the nearby marsh grasses, and spotted a pair of green herons fishing/hunting. It was fascinating to watch these greenish brown birds with relatively long golden beaks and yellow legs and squat bodies. They focused so intently on their small fry prey, staying very still for a long time before striking out and capturing tiny fish in their beaks. Herons are nothing if not patient. 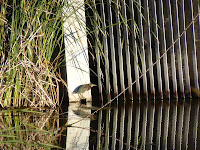