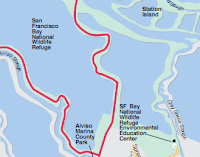 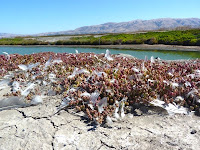 Yesterday, I had to cut the walk up the east side of this loop trail (not shown on this Bay Trail map -- but it lies to the east of the larger Alviso Slough loop trail -- which is shown as solid red line on map). Today I walked up the west side of the Mallard Slough trail and after a little more than 3 miles I reached the top of this loop -- with views of the now abandoned settlement of Drawbridge on Station Island (top right corner of map). And I got a better/closer look at the tops of some abandoned wooden structures, across a channel. 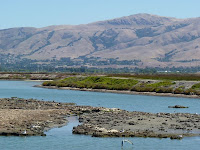 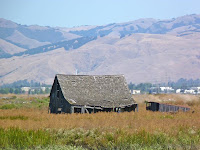 Fortunately, I arrived at this vantage point at the same time that a docent-led tour was being given in this same location. I was able to hear a few interesting facts about historic Drawbridge. Once a thriving community of residents and weekend hunters, and an area rich in shrimp and oysters, several factors led to its eventual decline: development, over-pumping of groundwater (which caused buildings to sink), and encroachment of the salt industry were a few of the challenges. The last resident left in 1979. 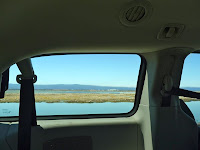 I was able to ride back to the Environmental Education Center in one of the tour vans. I'm including a photo of a view through the van window. Still a beautiful view, but I think it's a good example of how much more one can see on foot.

As with yesterday's walk in this same area, there were lots of birds to see, including a boatload of white pelicans and one lone brown pelican, successfully fishing for lunch. As usual, my rather unscientific account of wildlife spotted is published below. It's a shame to think that at least part of this trail might be closed in the future. 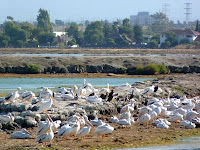 Posted by Corinne DeBra at 9:13 PM