This morning we walked from the northeast end of the Dumbarton Bridge to the southwest end of the bridge (in Menlo Park). 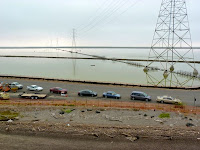 We walked on the only route possible for pedestrians -- a relatively narrow, shared bicycle and pedestrian path, on the south side of the span. This walkway was separated from automobile traffic by a roughly waist-high concrete divider.

During the first part of this walk, we could look down and see the fishing pier area and what looked to be part of the original Dumbarton Bridge, as well as a line of very large utility towers near the bridge that stretched out to the horizon across the bay. 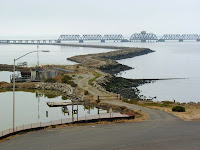 The bridge span itself, was not that long -- a little less than 2 miles (each way); I'm basing this estimate on the short time it took for us to cross (45 minutes). We took two cars, and parked one at either end of the Dumbarton Bridge -- so this was a one-way walk. 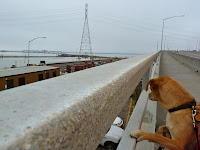 Last month I walked the longer (land) approach to the Bridge from the east side, roughly starting even with the bridge toll plaza and walking to the beginning of the bridge span over water. It was helpful to break this bridge walk into two or three pieces, especially since there were relatively few places to park to help stage this walk. (Ongoing construction at either end of the bridge further reduced the number of potential parking spots.) 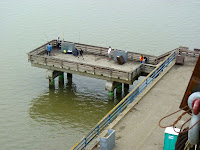 Of the 4 bridges that are walkable around San Francisco Bay (and that are part of the Bay Trail), I'd say the Dumbarton was the shortest, but perhaps the least relaxing to walk. We frequently turned to look over our shoulders to scan for bicyclists, to make sure we moved to one side when they passed. Our dog companion on the walk today seemed to look over the edge of the railing with a slight look of puzzlement. Fortunately, walking this span on Sunday morning meant traffic was light. 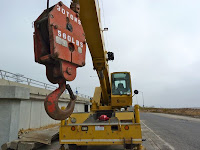 Wildlife sightings were limited mostly to birds we could see by looking over the edge down toward the bay -- such as a lone brown pelican circling above the fishing pier on the east side, or cormorants who like to perch on towers near the bridge; and there were a few ground squirrels who'd found a home in amongst construction materials at the foot of the bridge on the east side. 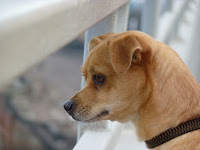 Thank you to Margaret and Albert for joining me on today's bridge crossing, over the Bay and into Menlo Park.