The Bay Trail follows San Pablo Avenue for quite a long way; this is the best route for bicyclists. At the same time, there are bits and pieces of trail further West by the Bay, some better suited for walkers. 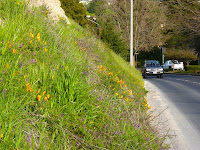 This afternoon, I continued my walk West along San Pablo Ave., (shown as double yellow lines on the Bay Trail map) from Tennent Ave. to Sunnyview. And next time, I'll investigate the Pinole Shores Regional Park (red line) trail closer to the Bay.

This stretch of San Pablo Avenue was mostly pedestrian-friendly, with sidewalks or setbacks on one or both sides of the street. I walked through the southern end of historic Pinole, and a bit further the historic homes and buildings began to shift to mixed commercial and light industrial areas. 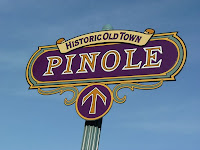 I turned around at Sunnyview, near the Foster's Freeze, and walked back toward Tennent Ave. I stopped to take pictures of several murals, yard/shop figures/sculptures, and mannequins in the windows of an evening wear store. Murals and creative figures were in abundant supply in this part of Pinole.

And, in fact, I continued walking West on Tennent Ave. when I returned, past where I'd parked my car, so I could photograph a Santa Fe train mural painted under a railroad bridge crossing. 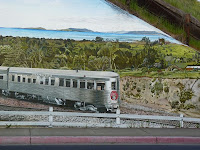 I also spotted some other murals across the street, and an older cat sitting on a doorstep. So, these last few blocks quickly degenerated into an exercise in fun, creative-picture taking rather than mindful, Bay Trail walking.
Wildlife Sightings:
1 sea gull; 1 little brown job (LBJ); 1 crow; 1 domestic cat (on Tennent Ave.) 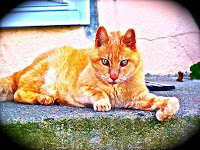 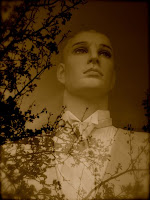 Posted by Corinne DeBra at 6:35 PM