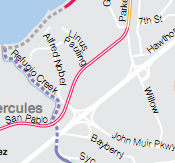 This stroll down San Pablo Ave. (shown as double red lines on map) was quite comfortable for pedestrian traffic, due to sidewalks covering the entire stretch. I walked along San Pablo Ave., from Victoria Crescent to the end of Highway 4 (also known as John Muir Parkway), which now terminates at at business park. 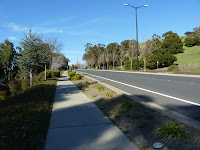 I wonder what John Muir would make of the term "office park" or "business park." Perhaps it's better he didn't live long enough to ponder this question. While a successful businessman himself, Muir did value open space. And, there is not much "park" in an office or business park. 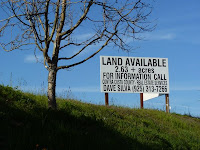 There was still some grass and trees in the hills surrounding this stretch of San Pablo Ave. -- enough to support a large hawk soaring above. (see very blurry picture of hawk shown at right). However, the open land seems like it is being developed at a rapid rate, with new dense housing tracts under construction.

I heard a few rustles and caught sight of tiny darting movements in the undergrowth, or what I call "blurs in the bushes" or BIBs for short. These were likely small lizards basking in the sun that were scurrying for cover as I walked by. This makes sense as almost one year ago,  last Spring, I took many pictures of lizards. Lizard season, in areas where they still exist, is about to begin again soon. This will probably make the hawk happy.