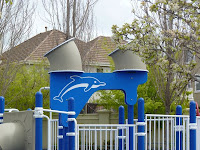 Thank you to Laura at the Bay Trail group in Oakland for helping me solve the puzzle about where this (solid red line on Bay Trail map) trail was located, near the Rodeo and Hercules border. I had been trying to locate this trail from the north end, from Lone Tree Point -- near 2nd Street, which is not really possible. There appears to be a parcel of private land or two that might be preventing access between Lone Tree Point/East Bay Regional Park land and this trail. 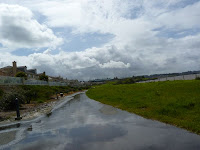 The Bay Area has received quite a bit of rain the past few weeks, and there were a few puddles of water on part of this paved (asphalt) trail. But, it was still a very pleasant walk.  I'd be willing to bet this path is normally quite dry. There were plenty of benches to sit on, relax and enjoy the occasional passing train, and views of the Bay.

I've noticed the past few weeks that the undeveloped areas in this part of Hercules harbor a large number of ladybugs, also known as ladybird beetles. I hope these can still thrive, despite ongoing development in the area. I've always liked these tiny, bright red-shelled beetles with black spots. 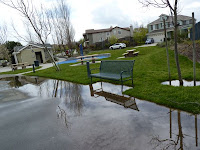 Posted by Corinne DeBra at 1:34 AM