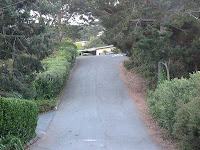 My walk this afternoon took place late in the day along a primarily unimproved stretch of trail and paths along the Bay (shown as two double yellow lines on Bay Trail map), past homes and apartments, and the Richardson Bay Audobon Sanctuary and historic Lyford house, with nice views looking down toward the mouth of the Bay, and occasional glimpses of a distant San Francisco skyline.

Road/trail surfaces varied greatly, from narrow dirt paths to paved asphalt roadways, with a touch of sidewalk thrown in occasionally. Sadly, the tail end of today's walk took place in near darkness, so these dim photos of today's sights don't do these places justice. 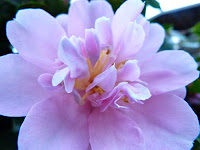 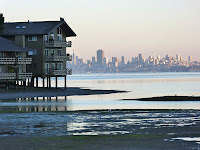 In the 1800s, this area straddled two large Spanish land grants (made to William A. Richardson (who had married Maria Antonia Martinez), and John T. Reed (who married Ylaria Sanchez). Over time, the land was split into thousands of parcels, but there are still pockets of tree-covered, relatively undeveloped areas, which makes this area feel less urban than it is. 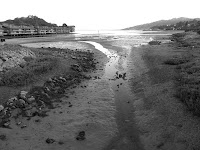 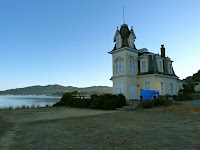 I started this walk by heading north along E. Strawberry Drive to a a hilly area that split traffic, and bore right. Soon after this, I made a right and headed downhill on Harbor Cove Way (Public Shore sign). I passed a gate to a school to the left, and made a right on path toward the small Harbor Cove Dock -- a great miniature picnic spot with a bench that, on a clear day like today, offered views of the distant San Francisco skyline.

From here, I hugged the shoreline and followed a packed dirt path that narrowed considerably in spots, and then became a slightly wider, paved asphalt path (the one stretch of improved trail shown as a solid red line on the Bay Trail map), with a few more benches, eventually emerging onto Greenwood Cove Drive, near The Cove Apartment Homes.

I continued to head north along Greenwood Cove Dr., and passed the historic Lyford house (originally located near Strawberry Point but now residing) at Richardson Bay Audobon Sanctuary property on the Bay side of the road. There was a wedding reception taking place on the grounds, so I wasn't able to hike the pretty oak woodland trail here. I was limited to taking a few pictures of the house, from a distance, on the walk back, when it was almost dark. I'll look forward to returning to walk this piece later.

Continuing along Greenwood Cove Dr. (which became Greenwood Beach Road), I passed some homes and the Tiburon Baptist Church on the left (up slight hill). I walked to the end of Greenwood Beach Road -- which dead-ended to car traffic, but where there was a small paved outlet path that cut through to the parking lot for Blackie's Pasture and Tiburon Linear Park. 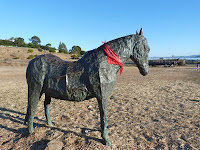 Blackie was a local favorite, and a statue (and cross) commemorating the sway-backed horse is often adorned with various items of clothing, hats, or small children. This evening, Blackie was sporting a large red bandana around his neck. 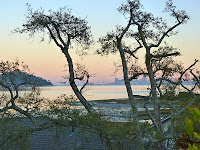 On way back, I re-traced my route, passing my car, and continuing south, back to 414 E. Strawberry Drive, where I left off last time. I enjoyed a few glimpses of post-sunset color over the Bay, between a lace curtain or silhouetted tree branches, then turned around to return to the car. 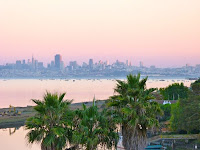