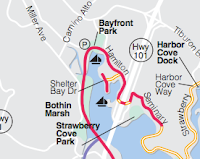 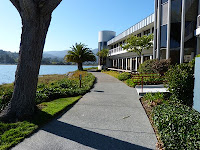 Today's stretch, north of Sausalito, in Marin County, was accessible by car from busy Highway 101, north of Sausalito. I took the Seminary Drive exit off 101, and parked (on the southeast side of 101) near a pedestrian/bicycle overpass. At the foot of this overpass, on each side of the freeway, were Stop and Ride areas, with small parking lots.

Today's Bay Trail segment, shown as solid red, and short stretches of double yellow, lines on the Bay Trail map, was mostly paved (asphalt, with a few stretches of packed dirt), and included some stairs and hills (worth it given views of Mt. Tamalpais). I walked mostly on the Bay Trail, taking a few detours along areas with Public Shore signs. 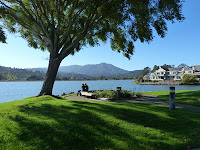 After investigating the paved (asphalt) and packed dirt trail (behind the nearby car wash and McDonald's restaurant near Seminary Drive) -- I made my way to the overpass, heading northwest.

After crossing over the freeway, and a frontage road crosswalk, I was in a more tranquil area of light commercial and residential developments intermixed with scenic trails. I walked through, and around, the Shelter Point Business Park, via a Public Shore area. 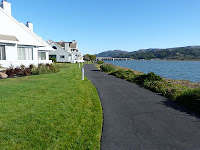 From Shelter Point Business Park, I followed the trail to, heading right and along, Hamilton Drive to the intersection with Shelter Bay Avenue. I took a left turn on Shelter Bay (shown as double yellow lines on map), walked to the end, and then through the Sunrise Pointe development to the Public Shore area of walkway along Richardson Bay (red line along shore on map). Note: this area does not look particularly public friendly, but there is public access here. 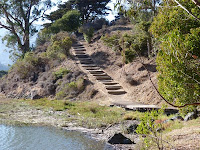 From this shore area, instead of walking back up to Hamilton Drive, I detoured north, sticking to a trail closer to the shore, and took a series of packed dirt and board stairs uphill to a tree-shaded area, with nice views from a bench at the top and along the way, and then continued downhill toward Bayfront Park, where I'd ended a previous walk. (Bicyclers might find this route/detour with stairs more challenging.) 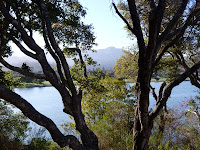 After a stretch, I came to, and crossed over, an arched wood bridge. A Mill Valley Parks plaque on this 2007 bridge indicated it was made from salvaged redwood -- a reminder of the giant trees that once blanketed the hillsides of nearby areas.

When I reached the Bayfront Park parking area, I turned around, but not before I stopped for a water break and looked around. This park was dedicated in 1984 and had signs and stickers that one might expect to find more often areas like Marin County, or perhaps Berkeley. 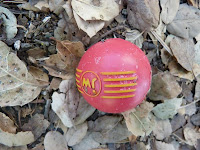 There were more messages that extolled a social good or cause ("May Peace Prevail on Earth," or "Adopt" underneath dog stencil art), or a mildly revolutionary scrawled sentiment, rather than gang tags one might find in rougher areas.

On the walk back, I admired berries growing in a large berry patch, and walked through Eucalyptus Knoll development (a detour) before heading down Hamilton Drive, and crossed back over to the southeast side of the freeway overpass. 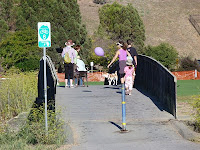 Rather than return immediately to the car, I extended my walk, as there was still enough daylight to investigate the area around DeSilva Island Salt Marsh and community (detour from Bay Trail). There was a short public trail with tree shade that headed uphill through this development (also a few stairs here). 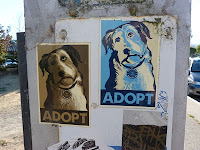 The views of the water below, visible between the trees, were nice. And, better yet, on a clear day like today, I could look south and see the San Francisco skyline beyond the boats in Sausalito, as well as Alcatraz Island, in the distance.

On the walk back to my car I enjoyed seeing egrets fishing in the marsh before sunset. 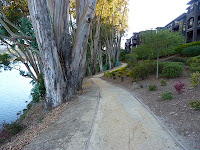 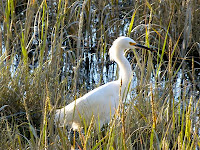