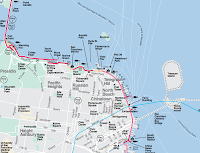 People have asked me if they can view the 34th America's Cup (AC34) yacht races (Summer 2013) from the San Francisco Bay and Bay Trail. The answer is yes, and maybe. The races are expected to draw thousands of visitors, and walking and bike paths will be an important part of getting people there and limiting car congestion. 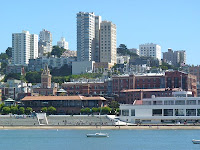 Construction has been underway for some time to get ready for this event, along the Embarcadero, Piers 15-17 (new home of the Exploratorium), and Fisherman's Wharf, and other areas near or including the Bay Trail -- including segments of refurbished Trail segments for bicyclists and pedestrians. I look forward to walking these segments when they're completed.

More on the America's Cup 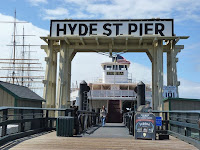 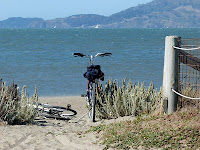 The Red Bull Youth America's Cup selection series of races will be coming up in February (with final races in September) 2013.

Where to Watch
Most of the action is happening in northeast San Francisco, and viewing areas may stretch from the Marina Green/Presidio area in the north, to several piers south of the Bay Bridge. 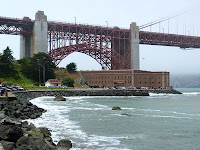 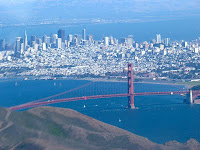 Boats may also be viewable (depending on weather, fog) from the Bay Trail in other areas: Northwest Alameda; Alcatraz Island; Angel Island; Fort Baker; Fort Point; the Golden Gate Bridge; and Treasure Island. Bring your binoculars.

Many of the hotels will have been booked by now. However, there are some great alternative sites that may have units or rooms available in San Francisco. Or, why not stay on a houseboat in Sausalito? Sausalito is a waterfront community (on the Bay Trail) on the north side of the Golden Gate Bridge; ferries travel between Sausalito and San Francisco, Tiburon, Angel Island, Alameda, and other destinations. (See my earlier entries on Sausalito to get a feel of the place.)