Today was a long walk, along the Tiburon peninsula, a beautiful stretch of the San Francisco Bay Trail with a well-developed walking and bicycling corridor. This segment offered, on a clear day, views of the San Francisco skyline and Angel Island to the south/southeast, and Richardson Bay, Sausalito and Mt. Tamalpais to the west/northwest. You may also, weather permitting, catch a glimpse of the Golden Gate Bridge. 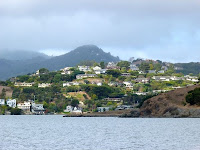 I walked this (solid green line* trail) with Mark Sommer, founder of Cocoa Rustica and radio host. We started this walk, in light misty weather, at Blackie's Pasture parking lot (Tiburon Boulevard and Trestle Glen Blvd.), and followed a paved (asphalt) walkway southeast toward Belvedere. Standing in open grass pasture space was a bronze statue of Blackie, the area's namesake. Blackie was a popular horse that, on a bet, successfully swam across the Bay from Marin to Crissy Field (San Francisco) in 1938. 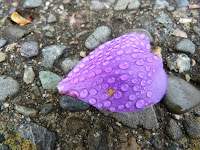 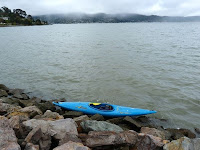 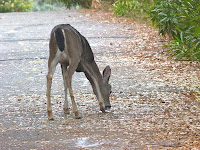 After walking southeast for a few miles the sun came out. We passed a kayak beached for a few moments on the shore, which got us thinking about possibilities for a walk + kayak on the Bay Trail (and new Water Trail). We chose to take a detour, to walk through Belvedere (not part of the Bay Trail), including a walk up to the hilltops of this small, but exclusive, peninsula community. The walk was beautiful and quiet (enough to say hello to a deer without it immediately bolting); and the views through the trees were fairly sweeping. 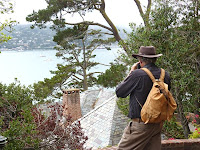 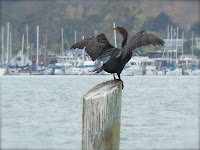 After making our way downhill and making a few stops on Main Street, in downtown Tiburon, we stopped at Sam's Anchor Cafe, for lunch outside on the water. A few sea gulls eyed us and other diners from a polite distance (for sea gulls that is), hoping for a tidbit or two. Had we lived locally, we could tied up at the dock, or caught a water taxi from the dock, back home. 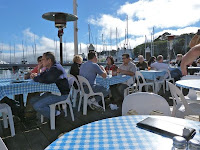 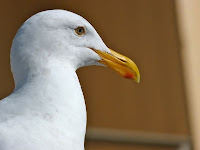 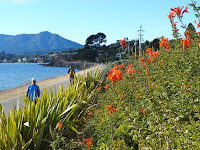 After lunch we walked the Bay Trail back (northwest) to Blackie's Pasture.

Toward the end of the walk, I lagged behind (happens often) to photograph some mallard ducks in a pond, and was glad I did. Shades of emerald green, in the vegetation and on the ducks, were striking. 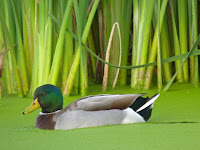