December afternoons fade into darkness rather quickly, so this was a(nother) short walk along Paradise Drive in Tiburon. 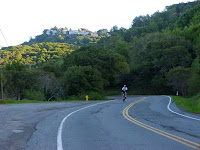 Shown as a dotted, dark green line on the new set of Bay Trail maps, this road is not part of the completed/improved Bay Trail. So, walk with caution. Keep an eye out for cyclists and cars, and stick to the edge of the road, and you should be rewarded with views of Paradise Cove and the Bay along this stretch of Paradise Drive. And, today (a clear day), the Richmond-San Rafael Bridge and the East Bay area cities (Richmond refineries down to Albany) were visible as well. 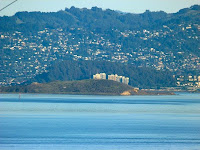 I walked southeast along Paradise Drive to the point where I'd left off yesterday, and turned around to walk back toward where I parked. Walking in a loop (as I usually do), I passed my car, and continued walking (northwest) as far as 4220 Paradise Dr., to a pull-out area with a wood fence. Here, I turned around and hustled to make it back to the car while there was still some light left in the day. 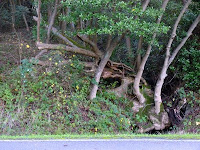 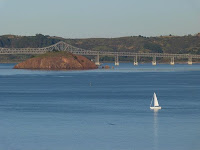 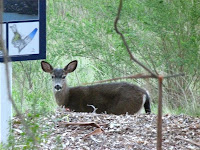 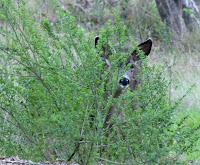 A handful of cars and a few bicyclists whizzed by me, but otherwise I enjoyed a peaceful walk by myself. I spotted a few deer. One was doing its best to appear to be invisible behind a bush. Pedestrians are relatively rare on this winding, relatively rural road, and the deer were a bit wary. I can't blame them for wondering what I was doing there at dusk (not an advisable time of day to be walking on a curvy road with narrow setbacks).