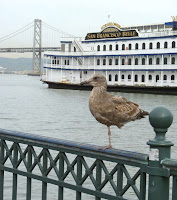 I've found it tough to make rapid progress through San Francisco, a great city with many distractions and places to eat, places to see. 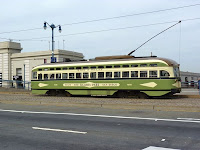 For example, as I waited to cross over to the Bay side of The Embarcadero, I watched the old municipal railway (muni) cars. "Ride and Relax" the print read on the two-tone green car that rolled by, and "Visit Zoo" -- in Balboa Park, in San Diego. These cars were rescued from various locations and put into service here. And they are one of several transit options running near the Bay Trail. BART also comes within a few blocks of the Bay Trail at the end of Market Street. 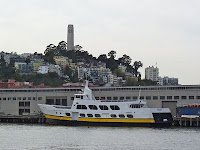 Today's walk was on primarily paved streets and sidewalks, along The Embarcadero (shown as double red lines on the Bay Trail map). Pier 7 (shown as a solid red line on the Bay Trail map), was a wooden fishing pier with a relatively smooth, wood plank surface. View up the hill of Coit Tower were an additional plus. 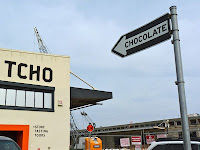 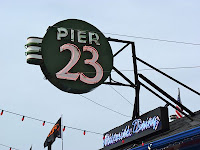 I enjoyed seeing ships like the San Francisco Belle, and the Hornblower fleet. Dinner and special event cruises are possible here. I headed north, and passed TCHO, a San Francisco chocolate maker, and the Pier 23 Cafe, before turning around to head south again. 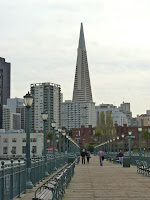 I walked out on/to the end of Pier 7 (shown as solid red line on the Bay Trail map). Here, I spotted more people holding cell phones than with fishing poles. Perhaps that had something to do with the large sea lion that kept raiding the bait in the net belonging to the one fisherman that I did see.

Watching this sea lion bobbing for bait made me hungry. I stopped at The Plant Cafe (known for its healthy, fresh food), for a chicken salad and a raw brownie bite to go, on the way back to the car. I parked in a metered parking space on Davis Street (south of Broadway). 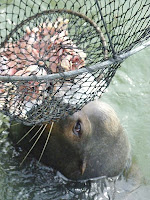 Did I mention that I keep getting distracted on my way through San Francisco?