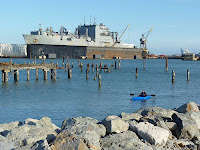 Parking is a bit challenging near ATandT Park if you're driving into San Francisco. However, there are garages; and this walk was close to a CalTrain ride into the City. I found a parking spot on Berry Street, and walked between some buildings to Mission Creek Park, and walked along the water to the 4th Street (Peter R. Maloney) bridge (1916). I crossed the bridge and headed south and to Mission Rock to Terry Francois. 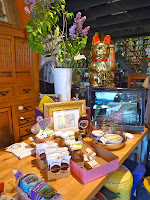 Terry Francois (shown as double red lines on the Bay Trail map) runs along the water's edge, and past buildings with a strong maritime theme -- e.g. the Mariposa Hunters Point Yacht Club and what I believe are some Port of San Francisco buildings. When I reached Agua Vista Park and fishing pier, I admired the view and continued south to Illinois -- to be more precise, the intersection of Illinois and 18th (where I'd left off on a previous walk). I turned around and walked back up Illinois -- shown as a set of yellow double lines on the Bay Trail Map. The yellow/golden color indicates the trail likely consists of surface streets that may or may not have formal sidewalks.

On the way back I stopped by the Gluten Free Grocery, a small establishment stocked with gluten free food items. This was great news for me (I don't eat wheat/gluten), so I loaded up. The atmosphere was warm and welcoming. A cat and a dog sauntered by me, open to being petted if I was in the mood. The owner was very helpful and pleasant.

Food bag in hand, I continued. Across the way was The Ramp, a single story wood structure with an altogether different feel. The attire was casual and the food was relatively straight-forward bar fare, nothing too fancy. There was outdoor seating on the water; mostly tables with a partial waterside view. I'm guessing people might stop by this rustic bar, in the China Basin-Potrero Hill area, for a beer after a San Francisco Giants baseball or San Francisco 49ers football game. 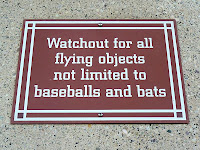 It may have been my imagination, but I noticed a lot more people and families enjoying this stretch of the Bay Trail today than I remember seeing two years ago. That's a good thing. The secret is out. 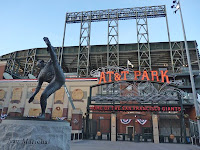 I made sure to pass by the Junior Giants Field (a small-scale ball field), and the statue of Willie McCovey before crossing north over the 3rd Street (Lefty O'Doul) bridge (1933). I passed one of my favorite signs ("Watchout for all flying objects, not limited to baseballs and bats") following the Bay Trail (all paved asphalt or sidewalks from here) around ATandT Park, past the marina with a view of the Bay Bridge, and up the Embarcadero toward Townsend. I turned around when I reached the point where I'd left off on a previous walk. 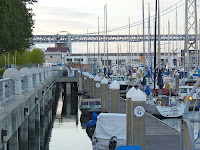 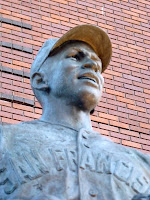 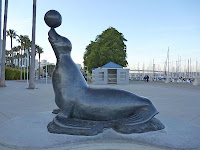