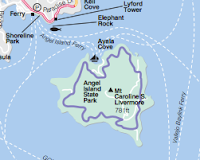 Angel Island, the largest of several small islands in San Francisco Bay, requires a ferry or boat ride to get there. The perimeter trail around the island is coded as a "purple" line, or connector trail, on the Bay Trail map. 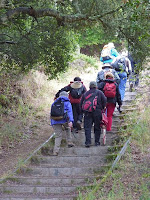 For my second walk around the Bay, I decided to divide the Angel Island walk into two parts. Today was part #1, that included a partial walk around the perimeter of the island, and a trip over the top of Mount Livermore. (When I cross the Golden Gate Bridge and reach Tiburon (ferry stop), I plan to revisit Angel Island and will walk the perimeter path on the other side of the island, that runs past the immigration station.)

On the hour-long drive up to the Tiburon ferry terminal, it was raining. However, it cleared up just in time for our walk. By the afternoon, patches of blue sky started to poke out now and then. The Golden Gate Bridge and the San Francisco skyline in the distance, were alternately visible, and then invisible, shrouded in mist. 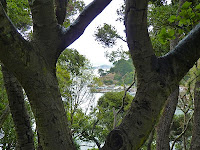 From Ayala Cove, our group walked up the hill, heading to the right, southwest, to the Perimeter Road. We passed an old military hospital, old Batterys, and other historic landmarks along the way, as well as clumps of yellow lupine and other wildflowers. Some buildings were in better shape than others. It would be wonderful to see some of these restored. 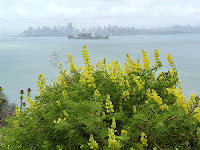 We stopped at a picnic table for a lunch break, and then continued until we reached a fork in the trail, uphill from the old Nike Missile site. 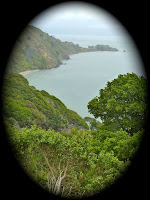 A few of us headed (left) and up the mountain, following the Ida Trail for a beautiful 360 degree view from the top of Mount Livermore. The top of the mountain had been removed/flattened out earlier, but was recently restored to a more natural state.

We took the Sunset Trail leading back down (north) to Ayala Cove. This trail was partly wooded and offered a bit more shade than the Perimeter Road trail, with views of Tiburon and north bay in the clearings.

Near the ferry stop, there are restrooms and a small place to stop and eat. We had time to buy a small snack before our ferry arrived. This small cafe closes up shop fairly early (often before the last ferry leaves), so you may want to pack some food and water with you. 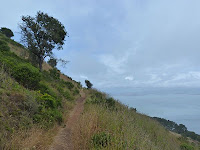 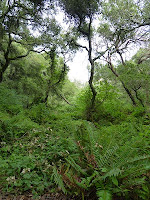 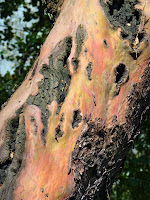 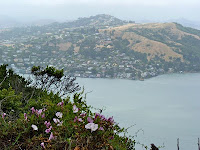 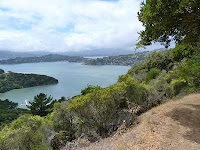 Posted by Corinne DeBra at 7:19 PM