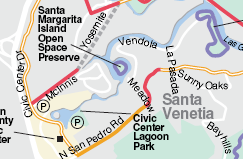 Today I followed Civic Center Drive North until it became Redwood Highway; made a large loop out McInnis Parkway (shown as solid red line on map) and around the peninsula and back (on a trail not shown on this map), circling the lagoon in Civic Center Lagoon Park.

I also hiked some trails near the Bay Trail (shown in purple on the map): 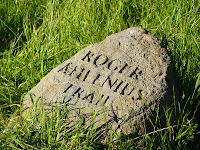 1.) Santa Margarita Island Preserve (small purple circle on map) is a fun small island tucked away from sight; and 2.) Santa Venetia Marsh Preserve loop (purple dog-bone shape loop), is near Gallinas Creek/San Francisco Bay. For more details on these two preserves, see bahiker.com or local city park descriptions. They are both hidden away in residential neighborhoods.

The Civic Center Lagoon Park, is across the road from the Marin County Civic Center (shown), and near the "Field of Dogs" dog park. The Park and the lagoon are quite large, and the lagoon is filled with ducks, sea gulls, pigeons, Canada geese, a few cormorants, and other birds. 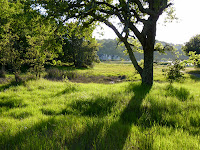 I saw my first duckling of the year today at this park (pictured at right). With children chasing birds around, and other hazards there, I hope the little ball of fuzz reaches adulthood.

16 crows; 58 pigeons; 105 ducks (includes 1 duckling); 69 sea gulls; 25 Canadian geese; 5 red-winged blackbirds; 3 cormorants; 25 little brown jobs (LBJs); 1 great egret; 1 large hawk circling overhead; 1 blue jay; 1 lady bug/bird; 1 white butterfly/moth + 1 brown butterfly/moth; 3 lizards (plus a few blurs in bushes that I suspect were lizards, but I can't be sure); 1 hummingbird; 1 snowy egret; 1 little brown rodent (vole?) who stuck his head out of his hole in the trail -- which was probably ill-advised given the large number of dogs walking in the area; and 1 hubcap along Civic Center Drive/Redwood Highway.
Posted by Corinne DeBra at 11:20 PM